With the fourth anniversary of the executions of Australians Andrew Chan and Myuran Sukumaran in Indonesia fast approaching, we must continue to challenge the notion of “an eye for an eye”.

Here are five reasons why.

The death penalty is irreversible. Absolute judgments may lead to people paying for crimes they did not commit. Texas man Cameron Todd Willingham was executed in Texas in 2004 for allegedly setting a fire that killed his three daughters. Following his execution, further evidence revealed that Willingham did not set the fire that caused their deaths. But it came too late.

There is no credible evidence that the death penalty deters crime more effectively than a prison term. In fact, evidence reveals the opposite.

Since abolishing the death penalty in 1976, Canada’s murder rate has steadily declined and as of 2016 was at its lowest since 1966.

The 2006 execution of Angel Nieves Diaz, by a so-called ‘humane’ lethal injection, took 34 minutes and required two doses. Doctors have said that it is likely Diaz’ death was painful.

Other brutal methods of execution used around the world include hanging, shooting and beheading. The nature of these deaths only continues to perpetuate the cycle of violence and may not alleviate the pain already suffered by the victims’ family.

4. It makes a public spectacle of an individual’s death

Executions are often undertaken in an extremely public manner, with public hangings in Iran or live broadcasts of lethal injections in the US. According to UN human rights experts, executions in public serve no legitimate purpose and only increase the cruel, inhuman and degrading nature of this punishment.

“All executions violate the right to life. Those carried out publicly are a gross affront to human dignity which cannot be tolerated,” said Hassiba Hadj Sahraoui, Amnesty International’s Deputy Director for the Middle East and North Africa.

“All executions violate the right to life. Those carried out publicly are a gross affront to human dignity which cannot be tolerated.”

5. The death penalty is disappearing

In 2017 two countries – Guinea and Mongolia – abolished the death penalty for all crimes.

Today, 106 countries (the majority of the world’s states) have turned their backs on the death penalty for good. Those that continue to execute are a tiny minority standing against a wave of opposition.

There are countless arguments for and against the death penalty. In an imperfect world where we can never be sure we have ever got the “worst of the worst” is it ever justified to take a life?

Find out more about Amnesty’s campaign to end the death penalty. 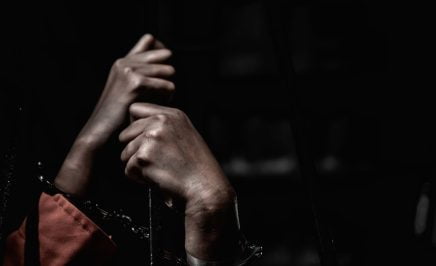