Amnesty International’s Crisis Response Director Tirana Hassan has spent the last ten years living and working in conflict zones. Here she describes the events that have shaped her life. 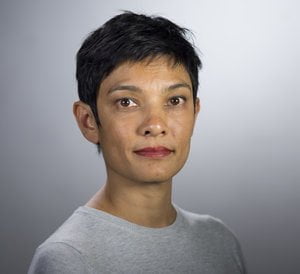 I have spent most of the last decade living and working in conflict zones and witnessing horrific events that can fundamentally change a person, but the event that changed the course of my life was quite ordinary.

In 2001, I attended a legal conference in South Australia where Eric Vardalis, one of the lawyers for asylum seekers trapped on the Tampa, talked about how he became involved in that seminal turning point for refugee protection in Australia. He said he had watched with horror the situation unfolding on TV and he went to bed saying to himself “I’m sure someone else will do something about this”.

The next day he woke up and thought “but what if they don’t?”

He picked up the phone and started calling around, by a combination of sleuthing and sheer determination he managed to get through and speak to the asylum seekers on The Tampa. His account, and particularly that thought “What if they don’t?” stayed with me and I realised I couldn’t assume others would do something about human rights.

I spent the next 18 months working with a committed group of pro-bono lawyers representing asylum seekers in the now defunct Woomera detention centre. There were hundreds of people from Iraq, Afghanistan and Iran living there in the most appalling conditions. They told me countless heartbreaking stories of families left behind and terrible persecution. I found myself on a path that took me to the countries that had caused these people to flee.

I spent 10 years in emergency humanitarian work, specialising in the protection of children and women affected by armed conflicts in Africa and Asia. However, I gradually realised I was still on the tail end of the crisis. I wasn’t the one picking up the telephone, I was picking up the pieces afterwards.

Protection shouldn’t be a retrospective concept. I believe that working in crisis response as I now do – bearing witness, being on the ground and forcing action and accountability in real time – can prevent further violations from happening.

I joined Amnesty International as the organisation’s crisis response director last year. My team and I are there to document what happens on the ground and to bring it to the world’s attention: to give the victims a voice and, hopefully, to act as a powerful deterrent. Our job is to record the killings, the rapes, the abductions before the evidence of these violations disappear into the fog of war. We then take that evidence to those in power and those responsible to stop it happening again.

Our job is vital because history has shown us one consistent thing: if someone commits atrocities once with impunity, they will do it again and again.

Three weeks ago, I was at the border of Turkey and Syria, watching an exodus of innocent men, women and children from Northern Aleppo escaping unimaginable terror and listening to their stories. Parents described how Russian and Syrian regime airstrikes struck their neighbourhoods and how they rummaged desperately through the rubble in search of the children they had sat down for their evening meal only moments before. They told me how the jets then circled back and struck again as they and rescue workers pulled out the survivors.

Syria can feel overwhelming because of the enormity of the conflict: the sheer number of displaced, the confusing number of parties to the conflict, the seemingly indefatigable rising toll of people who have lost their lives. However, when Amnesty International’s researchers tell us another human rights activist in the country has been disappeared, when a doctor calls to tell us another hospital has been targeted in an airstrike, my team does not have the option to be overwhelmed.

While it often feels like we can’t stop what’s happening in Syria just by documenting and being there, the reality is there are millions of people trapped within Syria, and millions displaced outside the country, and they rely on Amnesty International to stand with them and ensure that their voices are not forgotten and their lives are protected.

We are working in Syria to record what is happening for one very simple reason: one day this war will stop and then there needs to be justice.

There are very few clean hands in this conflict. The regime must stop the use of barrel bombs on civilian areas, the Russians must stop targeting schools and hospitals, the opposition forces must ensure the conduct of their fighting forces is in line with international humanitarian law. The laws of war are not a convenient buffet that warring factions can pick and choose from and Amnesty International is here to remind all parties of that fact.

Justice will come eventually but the suffering of millions of people cannot wait for solutions to happen down the track.

How we can help

There are meaningful things that can be done to help the Syrian people in the meantime.

Australia can use its voice much more effectively on the world stage to bring political pressure to bear on all parties to the conflict. This will require a much more ambitious and courageous diplomatic effort than Australia has produced so far.

And while it may be difficult to protect people inside Syria, Australia can certainly protect them outside Syria. Australia can increase its humanitarian assistance to the 4.8 million refugees in countries bordering Syria, and make sure that the 12,000 Syrians it offered to resettle to Australia make it here without delay. This year Australia has only pledged $20 million to the international aid effort, and has so far resettled very few of its 12,000 refugee quota. That is not the kind of rapid and ambitious response we need to see.

We can’t just sit on our hands and wait for someone else, somewhere else in the world to ‘pick up the phone’ and do something. It’s time to act because we can. Find out how you can take action now.