In ‘Daughter of the Lake,’ an Andean woman able to communicate with water spirits, uses her powers to prevent a mining corporation from destroying the body of water she considers her mother.

Just beneath the lakes that feed her village, Yanacocha, Latin America’s largest gold mine, has discovered a deposit valued at billions of dollars. They have the Peruvian government’s support to mine it, even though it means drying out the lakes. Farmers who live downstream oppose the project because they fear running out of water. It’s a life and death struggle. ‘Daughter of the Lake’ follows Nelida as she struggles for justice and to save her lakes.

Nelida’s story has parallels in Bolivia too, where a group of women live on dried out land. Their water disappeared after years of incessant mining. Marco, an ex-priest and Nelida’s mentor, is brutally detained by police whilst sitting in a public square, demonstrating peacefully.

Amnesty International has long fought to protect environmental activists and defenders, and particularly activists from the Americas who have been harassed, threatened, attacked, unfairly jailed, and even killed as punishment for their work to protect the environment.

This includes fighting for the protection of Máxima Acuña, a Peruvian peasant farmer and environmental activist in a legal battle with Yanacocha, one of the world’s biggest gold and copper mines, over the ownership of her land. She believes the harassment is an attempt to drive her away from her home. But she’s not going anywhere.

To find out more about our campaign to protect Máxima and other environmental activists, and to discover the dangers these people risk to protect their homes and families, check out our screening of ‘Daughter of the Lake’ at the Amnesty International Action Centre in Newstead on the 16th of February. 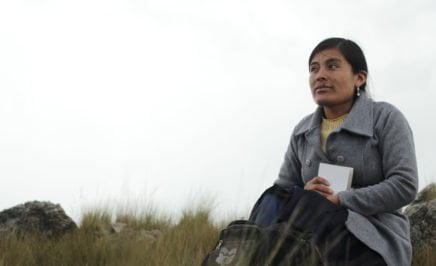