The African Union has dedicated 2016 as the “Year of Human Rights, with particular focus on the rights of Women.” In making this pledge, the AU signalled that the time had come to prioritise the need for real improvements in women and girls’ daily lives.

At the core, this requires urgent recognition of the importance of sexual and reproductive rights which empower women and girls to make informed choices about their own health, bodies and futures.

Already this year, thousands of women and girls have died unnecessarily in pregnancy and childbirth across the continent.

Already this year, thousands of women and girls have died unnecessarily in pregnancy and childbirth across the continent.

These deaths bear witness to the urgent need to bring women’s rights firmly into the frame.

Gender inequality is a cause of maternal deaths, often resulting in barriers to essential health services and information.

Obstacles such as user fees, the need for third party consent for treatment and a lack of privacy and confidentiality at health facilities can dramatically impact on maternal health outcomes.

Sexual and reproductive rights include the right to decide if, when and whom to marry and if, when and how many children to have.

Sexual and reproductive rights include the right to decide if, when and whom to marry and if, when and how many children to have.

Women and girls also have the right to choose any method of modern contraception, and the right to the information and education necessary to make those decisions.

These rights are set out in international laws, including the Protocol to the African Charter on Human and People’s Rights on the Rights of Women in Africa, known as the “Maputo Protocol.” African leaders have long committed to sign, ratify, domesticate and implement the Protocol. However, as at the end of June 2016, 17 African States were yet to ratify the Protocol.

African Leaders would do well to listen to Sara*, a girl from Burkina Faso, who suggested to Amnesty International recently that in order to tackle child marriage and improve health outcomes for girls, “we need to educate girls so that they can be independent and have the means to avoid forced marriages.

The woman is not considered at the moment, but with education, we can empower her.

Only 64% of girls in Burkina Faso can access education.

The authorities must enforce sanctions against families who give their daughters in marriage against their own consent, and eliminate forced marriages”

In Burkina Faso, for example, only 64% of girls can access education.

By the age of 19, most girls have already become wives, and nearly half of all young women are already mothers.

By the age of 19, most girls have already become wives, and nearly half of all young women are already mothers.

In Sierra Leone, pregnant girls are excluded from mainstream schools and barred from sitting vital exams.

Such action not only stigmatises an estimated 10 000 girls, but risks destroying their future life opportunities.

Child marriage and adolescent pregnancy and motherhood also increase the risk of other human rights’ abuses, including violence and violations of rights to education, employment and reproductive health.

Signalling cause for optimism, this year The Gambia became the 13th African nation to join the AU’s Campaign to End Child Marriage. 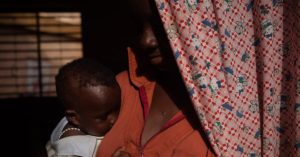 A woman and her child outside a refuge for survivors of rape, early and forced marriage in Burkina Faso. © Sophie Garcia/Amnesty International

In Malawi and Zimbabwe, the existing law has been successfully challenged to increase the legal age for marriage to 18 for both boys and girls. In June, the Southern African Development Community adopted a Model Law on Eradicating Child Marriage and Protecting Children Already in Marriage.

In order to genuinely tackle child marriage, states will need to go beyond the welcome law reforms and verbal commitments.

In order to genuinely tackle child marriage, states will need to go beyond the welcome law reforms and verbal commitments.

One of the most important measures will be for states to fulfil their human rights obligations – under the Maputo Protocol and others – to take concrete measures to confront and eradicate harmful practices and negative social and gender norms which condone and perpetuate the practice.

At the AU’s January summit this year, the African Commission on Human and People’s Rights also lit a flare of hope for women’s rights by launching a vital campaign calling for the decriminalisation of abortion in Africa.

The Commission emphasises the human rights’ violations associated with an estimated six million unsafe abortions which occur in Africa every year, resulting in 29 000 deaths and countless serious injuries and disabilities for poor, mostly rural-based African women and girls, under the age 25. 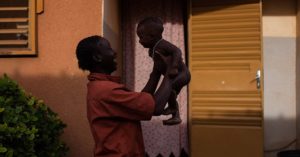 A woman plays with her child outside a shelter in Burkina Faso, which has the 7th highest rate of child marriage in the world. © Sophie Garcia/Amnesty International

There is much to celebrate at the year’s halfway point, but at the AU summit in Kigali, Rwanda this week, countries have no time to lose in ensuring a human rights-based approach, leading to real change and inclusion for women and girls in Africa.

This lens for implementation will support the AU’s development agenda under project 2063, and international development commitments of the UN’s sustainable development goals (SDGs).

Girls like Sara are waiting for states to live up to their promises. It’s time for the AU to show the necessary leadership on the protection of women and girls’ human rights. It’s time to enable girls to fulfil their true potential.

*Not her real name

This article originally appeared on The Namibian here.