Lucy Le Masurier, journalist, artist and researcher, talks to the queer community about how the representation of LGBT+ people affects their personal identities.

I was too young and disinterested in science fiction to form a relationship with the franchise of Star Trek. Thankfully, the 1990s comedy series Will and Grace, a show much closer to my heart, dedicated an episode to the coming out of one of Star Trek’s leading actors, George Takei, in 2005.

Although diverse and progressive in many ways, the Star Trek franchise followed a fairly hetero-normative narrative, so the significance of having a gay man behind the iconic role of Hikaru Sulu had the LGBT+ community flying high. Takei’s move was momentous because queer representation, both on our screens and behind them, was something the mainstream was so desperately lacking. His coming out was definitely one more step in a good, gay direction.

“Show after show, film after film: you feel forgotten and invisible”

For non-LGBT+ readers, you may wonder why this representation needs to be emphasised. Why is it seemingly so important to us? Well, for one, I’ll say you’ve probably never been to a family Christmas with your same-sex partner and had the question ‘Sooo, when’s the wedding?’ thrown at you. Because that’s what it’s like watching the same casts of heterosexual and cis-gendered characters on your screens show after show, film after film: you feel forgotten and invisible. Seeing ourselves represented on-screen means so much more than mere entertainment value.

The Adventures of Priscilla, Queen of the Desert © Flickr

Producers and writers had thankfully diversified in one aspect, but really failed in many others.The big problem with these casts of LGBT+ folk was typical to all mainstream media: it’s just so white. Current pop-culture vernacular is well-versed in the likes of ‘equality’, ‘diversity’, and ‘inclusion’, and there’s been a much-needed move in the past decade towards bringing more to our screens than rich, white, cisgender gay men and women.

The narratives have changed too, largely thanks to growing platforms such as Netflix, Stan and SBS on Demand, allowing for airtime outside the constraints of prime-time networking. We see the lived experiences of queer people of colour in the web-series Brown Girls (2017), transgender narratives that are played and written by transgender people in Transparent (2014) and the film Boy Meets Girl (2014); bisexuality as an actual sexuality, like Lexa’s character in The 100 (2014), and TV shows that don’t kill off their ‘token’ lesbian characters, such as in Master of None (2015).

“Moonlight, arguably the best film ever made, follows a storyline that makes your queer heart quiver”

This piece couldn’t be written without highlighting the importance of the Netflix production Orange Is The New Black (2013), showing a cast of women that have characters as intersectional as they are well-developed. Then there is 2016’s Moonlight, arguably the best film ever made (hello hyperbole!), following a storyline that makes your queer heart quiver. Seeing a film about a black and gay experience winning a Golden Globe and an Academy Award for Best Picture was, and is, huge in the fight for equality in our on-screen representation. 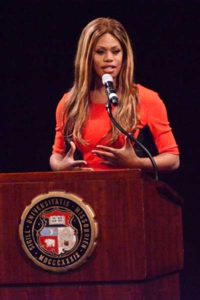 “Orange is the New Black” star Laverne Cox speaks to a sold out crowd for her national ‘Ain’t I a Woman?’ © KOMUnews

Many people I’ve interviewed in my research said watching queers on screen in film and TV, like Priscilla, Queen of the Desert (1994) and Ru Paul’s Drag Race (2009), made them feel like less of an outsider in a ‘real world’ community that didn’t make space for their gay identities.

So why is it so important to have adequate and true queer representation? Because we still live in a world where we have to fight to be seen and heard, not to mention given the same rights as our heterosexual counterparts. Stories, characters, narratives, and visual representations have the power to inform their straight and LGBT+ audiences alike, both with good and bad consequence.

Statistically, LGBT+ folk have poorer mental health, including self-harm and suicidal tendencies. These issues stem from many things, including ostracisation from family and community, social persecution, and legal and interpersonal discrimination.

I know myself that much of my anxiety came from a sense of isolation from the sexuality I said I was, and the one I actually was. As a child and teenager, I craved to see what I now know to be my own bisexuality in films, television, and stories. At the time, I didn’t know what this was or meant, because I had never seen what real bisexuality looked like in the flesh. I turned to TV and film to try and find it, but in the 90s and 2000s there were no good mainstream representations to guide my baby queer-self.

“As a child and teenager, I craved to see what I now know to be my own bisexuality in films, television, and stories”

I’m not here to say TV and film can change the statistical mental health disparity between straight and queer people, but I know I would have experienced my own sexuality in full much sooner if I’d learnt through watching. The relationship people have to stories is informative and persuasive, and the positive mainstream representation of LGBT+ folk means better education for straight and queer people alike. We learn from film and television, and with better representation comes less ignorance and discrimination.

Whether it’s seeing direct queer representation, or reading queerness onto certain characters (see Elsa in Frozen, or LeFou in Beauty and the Beast), the relationship we have with our onscreen selves has the potential to bring solace and acceptance to an audience, or to deeply isolate. On this path to equality, we need to be seeing change in all avenues. Our producers, writers, and image-makers make choices that have great consequence for the LGBT+ community. They just need to make the right choices.