Founded in August last year by Michael Carr and Ellen McNeill, Meaningful Movement is in a unique member of the Amnesty International Australia family.

What is Meaningful Movement?

The group is dedicated to celebrating the work that our Amnesty networks do in promoting human rights. The newly founded group brings together the creative community and our existing activist networks to host quarterly events to raise funds and awareness for the ongoing fight against oppression and injustice around the world.

Now this might not sound all that revolutionary, yet where Meaningful Movement splits from the pack is in it’s emphasis on celebration, not only of the great work being done but of the people doing it. Founded to give all the hardworking volunteers and staff at Amnesty as place to kick up their heels together a couple of times a year, the group has widened it’s scope, seeking to celebrate all change makers from around the world and all walks of life.

Having recently hosted the hugely successful Meaningful Movement on Women’s Rights event on the 5th of April, we sat down to ask founder and former creative director Michael Carr about the group’s origins, work and goals for the future. 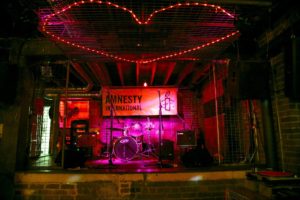 What made you want to start Meaningful Movement?

Look activism can be a bit of a slog at times. Whether it be lobbying governments or engaging with the community, with all the problems we’re working it’s easy to lose track of the victories. Meaningful Movement was founded with that in mind, as a group dedicated to celebrating the positive changes activism has achieved and the people who dedicate their lives to achieving them. More than anything we wanted to establish a new model of activism, that works as a support to more traditional forms and that seeks to inspire others to join the cause through positivity.

How has the group changed since it started?

Well it started out as a collaborative effort between the Meaningful Movies and Meaningful Music groups in August 2017. At the beginning we were each doing our own events, but we teamed up on one and it soon became apparent that both groups were stronger together than they were apart, and so Meaningful Movement was born. Since then the events have slowly changed, moving from monthly to quarterly, and focussing on short films rather than features and documentaries in order to open up the program to more music, live art and performance. We’ve gone from strength to strength too with our last event breaking our personal best fundraising record. How did you build up such an awesome and diverse team?

We recruited both within Amnesty and via social media and various university faculties looking to find like minded people who believed in our mission. The interest was huge, and so we didn’t really have a problem with finding people. A big part of this I think came from the fact we advertised for specific roles with specific titles such as Social Media Manager and Event Producer rather than just looking for volunteers. This meant we found recruits who already had an idea of how they could contribute to the group, and although there was a lot of role sharing and swapping in the first few months, framing the group in more professional terms with titles and a role description helped bring in the kind of candidates we wanted.

I stepped back from the Creative Directorship in March after laying the groundwork for the last event, and seeing the new recruits just pick up the program and run with it has been truly inspiring. It was also very necessary, as since my departure the new team members have been expanded the team and made the program their own, which is the best thing any founder could hope for, even if it was nerve wracking letting go.

We’ve also been very lucky to work in partnership with amazing community groups like Heartdancers and StayFly, creative collectives such as The Ladies Network and local media like FBi Radio and 2ser, not to mention all the great artists, filmmakers, musicians and performers that have donated their time. So it’s a broad church, in a good way.

Can you tell us a bit about the last few events and what to expect from the group in the future?

Of course. Well we rounded out 2017 with ‘A Night To Unite’ which in many ways was the first Meaningful Movement event as it sought to draw together all the different action groups and campaigns Amnesty was running into one big party. We were lucky enough to host a screening of the Academy Award nominated documentary Fire At Sea by Gianfranco Rossi about the European migrant crisis, and we also had some great performances by Heartdancers and live music from singer/producer CLYPSO and hip hop artist Dobby. It was a great success, building on our previous events, and it was the last time we hosted the program on a Tuesday, which having grown in popularity felt too big to be held so early in the week.

With that in mind, we took a few months off and decided we should move the program to a Thursday night, and host quarterly rather than monthly events, in order to give us to time to work on making the events bigger and better. Returning to our spiritual home at Freda’s in Chippendale on 5th of April 2018, the event – going under the name Meaningful Movement on Women’s Rights – was our most successful to date, breaking our personal best fundraising record and featuring an amazing and diverse line-up of talent. Instead of showing a feature film we curated a selection of short films from local female directors, with Heartdancers once again providing some amazing performers to get everyone moving, Milan Ring, Kimchi Princi and House of Riot Djs handling dance floor duties and StayFly curating the live art program, and dedicating their works to the group.

As for the future, I have to remain tight lipped, but let’s just say that we will be moving outside of our usual stomping ground and looking to take the community engagement further afield in Sydney and beyond.