On Saturday 10 November 2018, Amnesty International launched its Refugee Advisory Group, eight courageous individuals with lived experiences as refugees in Australia, to advise us on our work in this area.

Hosted by Deena Yako, member of the advisory group, and Amnesty’s National Refugee Campaigner Shankar Kasynathan, the event celebrated each member’s story. Having overcome the immense and numerous difficulties of escaping their homelands and resettling in Australia, they each now are using their narrative as a way to welcome, support, and empower refugees who have and still are experiencing equally traumatic and challenging situations.

Their stories were shared through discussions and performances by some of the group’s members and ‘I Welcome’ photo exhibition that featured each of their profiles as well as displaying examples of activism on refugee issues around the world as part of Amnesty International’s global campaign. 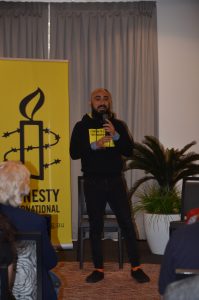 Performances included the powerful internationally renowned spoken work poetry of social change animator, educator, and author Erfan Daliri. He reflected on current global concerns and the importance of fighting for change, sharing his family’s experience escaping persecution in Iran and struggles in establishing a new life in Australia. 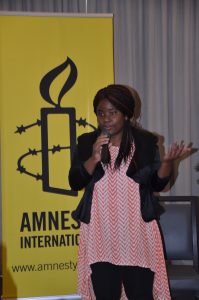 Traditional Sierra Leone stories and songs were performed by Yarrie Bangura, poet, songwriter, UNHCR ambassador, and business owner of Aunty’s Ginger Tonic. Humorously yet powerfully she brought it all together at the end of the event by demonstrating the fulfilling impact of kindness, respect, and generosity in helping out those less fortunate. 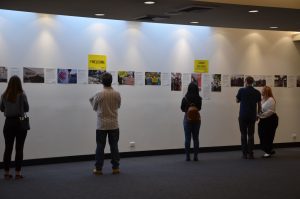 As spokespeople and representatives for Amnesty in their communities, this group will champion refugee rights. In particular, supporting Amnesty’s My New Neighbour campaign that advocates for an expanded and improved refugee community support program in Australia.

Currently under the program community groups, businesses, families and individuals can ‘sponsor’ refugees by proposing refugee applicants for a humanitarian visa, commit to supporting them financially for the first year, and helping them to integrate into the community. Such an approach both works to bring diversity and valuable skills into our communities, while providing newcomers with an established network that helps them adapt to their new life.

However, there are significant flaws in the current model which Amnesty proposes can be vastly improved. Currently the costs for sponsoring are ridiculously overpriced approximating $80,000 for the application and visa, and the spaces are limited to only 1,000 refugees a year. Plus, these places contribute to Australia’s quotas for its humanitarian intake of refugees rather than being additional to it, meaning the government passes its own responsibility to resettle refugees onto the community and private sector.

Amnesty therefore advocates for a cheaper program with more places that are additional to the government’s humanitarian intake, which would make it easier for communities, families and businesses to act as sponsors.

The advisory group will offer valuable insight into achieving these goals, drawing upon their experiences to advise on the best messaging and ways to gain support in Australian communities. As influential leaders in their own communities they will also play an important role in getting their communities moving in support of the campaign. 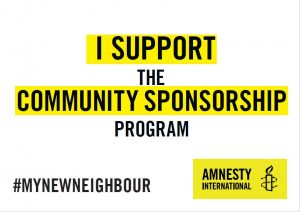 Momentum is strong, with support from many councils, organisations and communities,with 19 councils around Australia having passed motions reflecting community support for Amnesty’s model and the Labor Party recently announcing that it will make spaces additional to the government’s humanitarian intake as part of its party platform at the Labor Party National Conference in December.

But there is still work to be done.

If you would like to find out more about actions being planned to support the campaign and
how you can be involved please contact Dorothy Tran, NSW Community Organiser, at
dorothy.tran@amnesty.org.au.

And don’t forget to sign our petition calling for fairer refugee sponsorship!