“I was born in Rwanda, but was raised in Nakivale refugee camp in Uganda and lived there until I was 16 years old.

As a young man I came to Australia as a student. Now I live in Sydney and I help to resettle refugees in Australia, including in places like Mingoola and Armidale.

In Australia I was seeing one consistent problem: people with refugee backgrounds being resettled in the cities where employment prospects are few. Some found the city contributed to depression and social isolation.

People from Africa often come to Australia from war-ravaged countries. They are from Rwanda and other places close by, and have been displaced by civil war. Many of these people had rural backgrounds and struggle sometimes to adapt to urban lifestyles.

“The key issue among our community is that a big number of them want to live in rural areas because they feel they have roots that touch the land.”

If you ask them, ‘what was your dream when you applied to come to Australia,’ they say, ‘We hoped we were going to be put in the countryside, to connect ourselves with agricultural life and have a garden’.

This is why I became passionate about helping families with refugee backgrounds move from Australia’s cities to regional Australian communities. 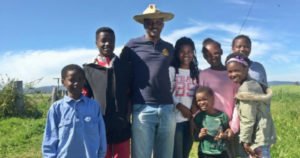 In 2016 I helped African refugees resettle in Mingoola, a speck of a town on the border of NSW and Queensland. Julia (a local community leader in Mingoola) and I saw a solution to both our problems – a country town with declining population, and a rural lifestyle for refugees. It was a meeting of dreams.

The locals in Mingoola renovated abandoned farm houses and in no time, African families started to move in.

“For refugees it gave them an opportunity to return to their roots.”

At the moment more than 200 skilled farming families, most with generations of experience working the land in central Africa, want to relocate from Australian cities to regional areas like New England in New South Wales. They miss that agricultural life, to be on the land, having animals, growing crops….and building a community. The families are looking for farm cottages and small blocks of land outside main regional centres like Armidale, Glen Innes and Tamworth.

The Armidale region is a perfect location to resettle refugees – there’s ongoing employment at the tomato farm, trauma counselling, settlement services, a refugee nurse, a homework centre… and in addition, a community that is multicultural.

So one morning in 2016, I walked into a room full of refugee advocates in Armidale, New South Wales, and asked them, “How can I help?”

I’m now reaching out to farmers in the Armidale region to find suitable homes for families and looking forward to seeing more families resettled in the area.

Looking to the future

The communities I am working with are ready to lead the resettlement of refugees, and refugee families are prepared for their lives in regional neighbourhoods.

This is why I and my organisation support Amnesty’s campaign to expand and improve community sponsorship for refugees. We have been doing this already, and looking to the future, we are ready and willing to work with local councils and other groups, to facilitate regional and rural resettlement through community sponsorship.

Emmanuel Musoni is the chair of Great Lakes Agency for Peace and Development International, a community organisation founded in 2012 in Sydney. Could the results of Afghanistan’s presidential election see the return of the Taliban? And what...
Read More Dr Charlie Perkins: the Australian hero you should know about

This amazing activist gathered a group of black and white protesters, placed them in a bus, and...
Read More