Join activists around the world this Human Rights Day for a 24 hour letter writing marathon on Twitter and Instagram.

Write for Rights is one of the world’s largest human rights events and on Human Rights Day we want the world to see how far and wide the campaign reaches, and all the great work we do to change lives.

On 10 December we will be using Twitter and Instagram to show that people all over the world are writing letters for those whose rights have been abused. You can find more information on Write for Rights cases under the heading Resources .

Globally, there are a core group of activists taking part during every hour of the day through every time zone. Amnesty’s International Secretariat Twitter account (@AmnestyOnline) will retweet and quote these actions (you must use the hashtag #W4R16) to capture the wave of activity as it travels across the 24-hour cycle.

Amnesty activists across the world, and all timezones, will be on Twitter and Instagram at midday (local time). This means in Australia our time slot across all time zones is midday your time.

Your event can be as simple as you at home writing some letters at midday, at a coffee shop with friends writing letters, or as big as a community event. If your event is earlier in the day, or later in the day, that’s fine too. It’s more important that you take part.

Here are the three easy steps to take part:

Please take photos of letters– it can be lots of letters, one whole letter, or you can highlight one powerful sentence, or a drawing, or anything that shows it is personal. 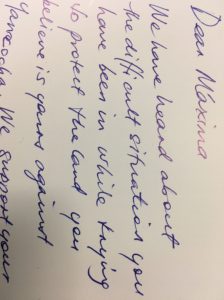 Upload the photo. If you want to Tweet without an image, that is fine too – just drop the first three words “My letter for/to” in the sample tweets below. Make sure you use the two important hashtags.

Use one of the relevant sample messages below. These are just suggestions as you can write your own messages.

Make sure to use the Write for Rights global hashtag #W4R16 so that Amnesty’s global Twitter account can find it and retweet it.

Please also use the hashtag #W4ROz so we know it’s coming from you. Each tweet that goes to a government target e.g. @PR_Paul_Biya for Cameroon, will be counted as an action. The tweet will go to the Australian action tally, which feeds into the global action counter.

Please have your location services switched on. Because this is all being done in real time, right around the world, it makes it more exciting and helps to show that Write for Rights is really global!

Below are sample Twitter and/or Instagram messages for each case we are working for. You are encouraged to write your own too :

My letter for #FomusohIvoFeh, jailed for 10 years for texting a joke in #Cameroon. @PR_Paul_Biya: Free him now! #W4R16 #W4ROz

Target: the Chinese President does not have a Twitter account, so we ask that you include #China and #XiJinping

My letter to #FreeIlhamTohti jailed for life for his writings & lectures in #China. #XiJinping must release Ilham now! #W4R16 #W4ROz

My letter for teacher #JohanTeterissa 15 years in jail for waving a flag! @jokowi #FreeJohan & #POCs in #Indonesia #W4R16 #W4ROz