From China to Syria, Kenya to Egypt, girls and women are rising up and risking their lives to stand up for what they believe in. Activists, lawyers, sisters and students, these women have put their lives on the line, fought for lost loved ones and stood up for strangers. Now it’s their time to shine. Meet the inspiring women defending human rights around the world… Wu Rongrong is best known for being one of China’s “Feminist Five” – a group of women arrested in 2015 for planning a campaign to tackle sexual harassment. The arrests, which coincided with International Women’s Day, led to an international outcry, garnering support from the likes of Hillary Clinton. Although the women were released, the “Feminist Five” have remained under surveillance.

Prior to her arrest, Wu Rongrong was a leader of the Women’s Rights Action Group, whose bold, creative stunts have drawn public attention to gender inequality and sexism. The group have shaved their heads to protest against discriminatory higher college admission requirements for female applicants, and worn wedding dresses spattered with red ink to protest against domestic violence.

“Women face many challenges throughout their lives, but many of these issues often remain invisible. For example, survivors of sexual harassment not only experience unspeakable pain, but also lack efficient legal protection. If victims were not blamed, but emboldened to seek redress, it would help to reduce sexual harassment.”

On top of her advocacy work, Wu Rongrong is also a social worker and registered counsellor. She is currently pursuing a master’s degree in Human Rights Law. For Syrian human rights lawyer Noura Ghazi Safadi, campaigning for the rights of prisoners of conscience is about love, hope and family. Born in Damascus in 1981, Noura has been a lawyer for many years, focusing on human rights, detention and disappearances. She had an early introduction to human rights violations against political prisoners when her father was arrested. Her husband Bassel Khartabil Safadi, a digital activist who was arrested by the Syrian government in 2012, was executed in 2015.

“My father was a political prisoner several times. I used to visit him in Adra prison and attend his trial hearings. Once, I had a run-in with the commanding officer of the patrol that was transporting [him] to court.”

“I swore to him and my father that I would become a lawyer and defend prisoners of conscience. I was 12 years old at the time. And when Bassel [her husband] was arrested, defending my own prisoner of conscience became my obsession.”

“Since my husband was executed, [I feel] every prisoner’s case is my business and it’s my responsibility to fight for them. I feel women are best placed to deal with this issue, because of the leading role they play in building Syria’s future. They have demonstrated that they are capable of handling every obstacle before them, whether it’s to do with security, the community, or life generally.”

Joy Wathagi is an Amnesty International youth leader in Nairobi,Kenya,and she’s taking a stand for a teenager thousands of miles away. Student Taibeh Abbasi, 18, lives in Norway and dreams of becoming a doctor, but she’s at risk of being deported to Afghanistan, a country she’s never been to. When Joy heard that Taibeh’s classmates were organizing protests she wanted to show solidarity, so she decided to participate in the #TellNorway campaign on social media to highlight Taibeh’s case. “When I heard that Norway was going to deport teenagers I was filled with sadness and wanted to do something about it,” Joy says. “I remembered all the refugees that came to my country, Kenya. I have met people from Somalia, Sudan and Rwanda and seen that they deserve to live here as much as any Kenyan.”

“I have gone to school with many refugees, grown with them, and they have become my life-long friends. I would truly hate to see them get sent back.”

“Afghan refugees are going back to the same situation that they left behind. It is cruel and unfair. They have become part of the fabric of Norwegian society and must be treated as such. My biggest motivation to contribute to the #TellNorway campaign was the determination to save people’s lives and give them a chance to live in safety with dignity and purpose. Saying ‘go back to your country’ is the most thoughtless and selfish phrase that I keep hearing and it breaks my heart. As countries, we need to provide support and not build fences.”

Grief turned Shackelia Jackson into an activist. On 20 January 2014, Shackelia’s brother Nakiea Jackson was busily preparing lunch at the restaurant where he worked when he was shot dead by police. They said Nakiea matched the description of a man they were looking for after a robbery. Shackelia has been fighting ever since to bring those responsible to justice, braving police intimidation and harassment.

“The pain that my family and I suffered forced me to fight for justice for my brother and for all victims of police brutality. I have become a broken sister who speaks out so that others won’t forget.”

Shackelia has joined dozens of other families in Jamaica who live with similar tragedies, many of whom have joined forces to put a stop to police violence. “I was set on a life-altering path to bring about the legislative and policy changes that will secure justice for all and end state violence and terrorism in Jamaica, so that future lives can be saved. And despite relentless attempts by the Jamaican authorities to stop me succeeding in this, I am undeterred, and I refuse to give up.”

“I am undeterred because I was given the shoulder of giants to stand on. Amnesty International and its allies have provided me with a global platform to rewrite a history of wrong. Kindness reminded me that I was broken, not destroyed.” 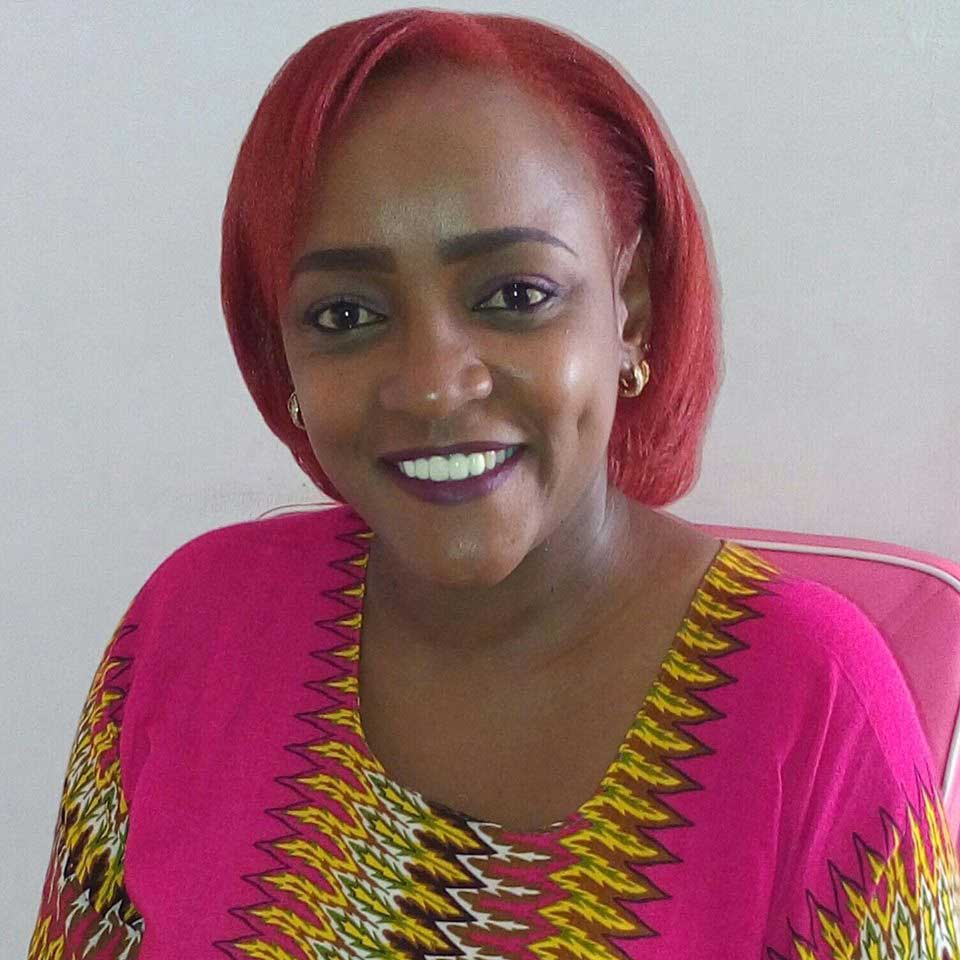 In 2012, Wanjeri Nderutook a brave step. She left her financial job to become a social justice activist.

Since she switched careers, Wanjeri’s work has included fighting against extra-judicial executions by Kenyan police, campaigning successfully to free four Kenyans detained in South Sudan and advocating for free, peaceful and fair elections in Kenya.

However, she’s paid a price for speaking out. Wanjeri was arrested for participating in peaceful protests in 2013 and she’s faced attacks both online and offline. In 2015, she was physically attacked by a man, who approached her car and said, ‘Wacha kelele, ama tutakumaliza’ (Stop making noise otherwise we will finish you). He then hit her in the eye and walked away. She also received relentless misogynistic abuse from a group of men on Twitter for an entire day.

“The group leader kept tagging more people onto his insults, inviting them to join in. I counted about eight men in total who took part. The insults were extremely personal, body shaming me and my family.”

In a bid to protect herself and her family, Wanjeri has sought refuge elsewhere in Kenya, however she won’t let the actions of a few silence her. She remains a vanguard for a new generation of activists, determined to speak out for what they believe in. Azza Soliman bravely speaks out for survivors of torture, arbitrary detention, domestic abus eand rape in Egypt. She co-founded the Centre for Egyptian Women’s Legal Assistance and later Lawyers for Justice and Peace, which provide impoverished women and girls with legal aid, support and literacy lessons.

Azza’s courageous and selfless work led to her being labelled a spy and a national security threat by the Egyptian authorities. In December 2016, Azza was arrested and interrogated by authorities. She was released after being briefly detained, but is facing charges such as receiving foreign funding in order to slander Egypt’s image. Azza has been banned from travel, her assets have been frozen and she could face time in prison. But this incredible woman hasn’t given up the fight.

“The struggle to enhance and support women and human rights is long and tiring,” says Azza. “Yet, I still have hope. The overwhelming messages of support and love I have received [through Amnesty International’s Write for Rights campaign] reminds me I am not alone and that my work is appreciated and recognized.”

“I can see new generations taking the torch and leading the way to a better future. One day, we will overcome these difficulties and challenges – that’s what keeps me going.” Activist Zhang Leilei is a woman on a mission to end sexual harassment in China. In 2017, she designed subway ads to raise awareness of the issue, but they were rejected by the subway authorities. So Zhang Leilei turned herself into a human billboard, and women around the country followed suit!

Now Zhang Leilei is taking her activism to universities. Earlier this year a professor was sacked after being accused of harassment by a former student. This sparked a widespread public discussion and Zhang Leilei saw an opportunity to push for change. Along with others, she called for students and alumni to write open letters to their universities demanding proper mechanisms for reporting sexual harassment. People didn’t need much convincing.

Less than two weeks after Zhang Leilei put out her call, students and alumni from up to 70 universities published their own open letters. They’ve already had a real impact – national reports say that the Ministry of Education in China is looking into setting up new systems to prevent sexual harassment.

*Zhang Leilei is a pseudonym Hortense Lougué must be one of the busiest women in Burkina Faso. Having grown up in a country fraught with injustice and inequality, where girls can be forced into marriage or to undergo Female Genital Mutilation (FGM), she has dedicated her life to ending gender-based violence, and has set up multiple projects to advance education and human rights. Hortense Lougué now works with young girls and women who have been forced into marriage or suffered FGM, providing education on how to tackle these issues.

“I have been an activist, general secretary, program coordinator and today I am an executive director of the Association of Support and Awakening Pugsada (ADEP), an NGO focused on improving the legal status and socio-economic living conditions of girls.”

“I lead 10 projects and through determination and perseverance, we are committed to improving the lives of girls and women in Burkina Faso.”

Many of these women are part of Amnesty International’s Brave Campaign, which strengthens the recognition and protection of human rights defenders around the world. Five women defending human rights that you need to know about

In the face of discrimination, violence and imprisonment, these extraordinary women are refusing to...
Read More Sudan: Death sentence for raped teenager is an intolerable cruelty

A Sudanese court’s sentencing of a 19-year-old woman to death for killing her rapist husband in...
Read More