In 2020, Amnesty International Australia supporters took over 185,000 actions as part of Write for Rights, our global letter-writing marathon.

Write for Rights (W4R) brings millions of people together to stand in solidarity with courageous people around the world who are facing human rights abuses. When people unite behind someone whose rights have been wronged, the results can be amazing.

Twenty years of writing for rights

Twenty years ago, a small group of Amnesty activists in Poland held a 24-hour letter writing marathon – the first Write for Rights. The idea took off and today, Write for Rights is the world’s biggest human rights event.

Every year, people from 170 countries get together on 10 December, World Human Rights Day to write letters. Your words can and have freed people from human rights abuses and changed lives. Knowing you are a part of a community of changemakers is powerful tool to have in your hands – as well as a pen.

From 2,326 letters in 1991 to 4.5 million letters, tweets, petition signatures and more in 2020, Write for Rights supporters have united behind a common purpose – backing people no matter where they are in the world. Together, they’ve helped transform the lives of more than 100 people over the years, freeing them from torture, harassment or unjust imprisonment.

Here are some ways your words have had the power to change lives.

In April 2018, human rights defender Germain Rukuki was sentenced to 32 years in prison in Burundi for campaigning against torture in his home country. He was jailed before getting a chance to hold his youngest child, born just weeks after he was taken. His family fled the country for fear of reprisals.

On 1 July 2021, Germain was finally released thanks in part to the more than 436,000 actions calling for his release. Germain’s wife Emelyne Mupfasoni shared her thanks with all those who took action.

“From the bottom of my heart, I want to thank you all to have mobilized and made it possible for Germain to reunite with us soon.”

Nassima al-Sada, a campaigner for women’s freedom, was arrested in 2018 for peacefully defending human rights. While in jail, guards beat her and banned everyone – even her lawyer – from visiting her. But thanks to supporters worldwide who wrote a massive 777,611 letters, tweets and more, Nassima walked free in June 2021, and is back with her family and friends.

3. We stood with the Australian LGBTQIA+ community to end conversion practices (W4R 2020)

Friends Popi Qwabe and Bongeka Phungula were murdered while heading for a night out in May 2017. Until recently, their families had been distressed by irregularities and delays in the police investigation. However, in March 2021, police revived the case after receiving 341,106 petition signatures from Amnesty supporters worldwide.

The police have completed their investigation and handed over the case to the country’s National Prosecuting Authority.

“I feel optimistic. I feel like finally, something is about to change.”

In Iran, it’s a crime for women to appear in public with their hair uncovered. Yasaman Aryani, a 24-year-old activist, wanted to change this. With her head uncovered, Yasaman handed out flowers to women on a train in 2019. She’s been sentenced to 16 years in prison for campaigning against forced veiling.

Around the world, over 1,229,634 people took action for Yasaman in 2019. The Write for Rights campaign brought global attention to her case and her sentence has been reduced on appeal.

Amnesty International will continue to campaign for Yasaman’s release, and the release of all women’s rights defenders imprisoned in Iran.

In March 2019, Kyrgyzstan ratified of the Convention on the Rights of Persons with Disabilities. When Gulzar Dushenova lost use of her legs in a car accident, she made it her life’s mission to ensure people with disabilities can live with dignity and move around freely.

Amnesty supporters joined with Gulzar and other disability rights advocates to call on the Kyrgyzstan Government to ratify the Convention – sending nearly 250,000 letters to Kyrgyzstan’s Government in support of Gulzar’s mission.

“I am grateful for all the support and solidarity from so many of Amnesty International’s activists who care about our rights despite being from a different country.”

In August 2018, the Chair of Amnesty Turkey Taner Kilic was released after more than a year behind bars. He was imprisoned in June 2017 on suspicion of being a member of a ‘armed terrorist organization’ – an absurd attempt to choke his human rights activism. More than a million people from 194 countries demanded his freedom.

Student activist Phyoe Phyoe Aung was released from prison in April 2016. She had been jailed in 2015 for helping organise a series of marches against a new law in Myanmar, which students said limited academic freedom. She faced up to nine years’ imprisonment.

“Thank you very much each and every one of you. Not just for campaigning for my release, but for helping to keep our hope and our beliefs alive.”

Albert Woodfox spent over 43 years in solitary confinement in a Louisiana state prison – believed to be the longest anyone has survived in solitary in the USA. In W4R 2015, more than 240,000 action-takers called for Albert’s release. He was finally freed in February 2016.

“I can’t emphasise enough how important getting letters from people around the world is. It gave me a sense of worth. It gave me strength – convinced me that what I was doing was right.”

After 10 years in jail and more than 800,000 messages from activists around the world, Moses Akatugba’s life was spared in June 2015. Falsely accused of stealing three mobile phones, he was tortured and wrongfully sentenced to death when he was just 16. He was granted a full pardon after pressure from Amnesty supporters during W4R 2014 and our Stop Torture campaign.

Melike and Özgür were taking part in a peaceful Pride march at their university when they were met with police who used pepper spray, plastic bullets and tear gas on the protesters. They and 17 others were then charged with “unlawful assembly,” “failing to disperse despite being warned” – and faced 3 years in prison.

We run Write for Rights every year because it works – real change happens because of actions like these. Their words have freed people from human rights abuses and changed lives. Knowing they’re a part of a community this powerful has changed their lives, too.

Join in today, Write for Rights 2021 is here. Write a letter, change a life – including yours. In 2020, Amnesty International Australia supporters took over 185,000 actions as part of Write for...
Read More 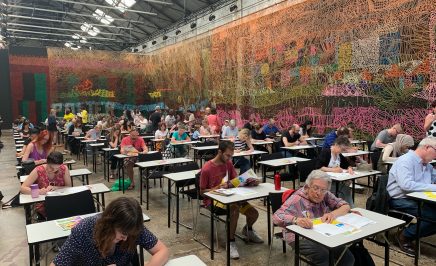 Write for Rights 2017: What we achieved