In 2017 we saw hundreds of thousands of Rohingya refugees flee ethnic cleansing in Myanmar and the formal closure of the Manus Island detention centre. We were all left with the question: where to from here?

A life of fear Shankar with his father © Shankar Kasynathan

My father used to be a teacher. He taught philosophy at a university in the hill country of Sri Lanka. It was his dream job. He made friends easily with activists and students and loved being able to share his knowledge with them. After a long day at work, he would call his mother and sisters – who lived in a fishing village several hours away – from a payphone to check they were okay.

Although he didn’t know it at the time, my father was being closely watched as he did these things. The Vice Chancellor of his university compiled a list of Tamil academics he felt were behaving suspiciously and gave it to the authorities. My father’s everyday activities were observed and reported to the police.

Ultimately, his associations with Tamil students and activists made him a terror suspect. He was questioned on the notorious Fourth Floor of Sri Lanka’s Criminal Investigation Department – reputedly a torture facility, with rumours of people falling from windows. Thankfully my father survived. Shankar with his sisters © Shankar Kasynathan

In 1987, my family and I fled Sri Lanka, leaving behind the arbitrary police searches and our sense of fear. We came to Australia in search of refuge.

We weren’t forced to come by boat. Others have been.

We weren’t re-routed to the hell that is Manus Island or Nauru. Others have been.

We were sponsored. Others must be.

Community-led, neighbourhood-driven solutions are how my family and I escaped a life of persecution, cruel racism, and life-threatening situations.

As a four-year-old, I remember the gifts we received from church groups at our home in Mount Waverley. Beds. A TV. The food we ate. The dining table we gathered around as a family. I remember my sisters and I laughing over the Melway (Melbourne’s road map) which – back in 1987 – showed a cross at the location of our home. The house we were renting was a social housing property managed by the council and a church. We later bought it, and it’s still home today.

The generosity we received is not unfamiliar to other families who have come to this country seeking protection. Communities around Australia look to our government to deliver a fair, safe and orderly system for refugees but successive governments have failed. We are witness to the cruelty and abuse resulting from their failure and we have raised our voices loudly in response.

“All cities are mine, and everyone is my kinsman.”
Kaniyan, Tamil philosopher circa 1st Century BC

Over 1.19 million women, men and children need to be resettled in a safe country, yet only 30 countries offer just over 100,000 annual resettlement places. This is a global issue and all governments, including Australia, need to do their bit.

It’s time to start focusing on the solutions.

It’s time to start building power in our communities and wielding it.

It’s time to get to work. We can build safe and inclusive communities and welcome those who need our help.

Community sponsorship – where everyday people in the community contribute towards the cost of resettling a refugee – has worked in Canada for over 40 years. Together, Canadians have helped more than 280,000 refugees find safety. It can work here in Australia as well.

Australia’s current proposed community sponsorship model is limited and expensive for people to take part in. The Australian Government needs to expand and improve the program so more families can start to rebuild their lives in safety, just like mine did 30 years ago.

We must harness the strength and compassion in the nearly 150 self-declared refugee welcome zones around the country. These Local Government Areas provide homes to refugees with incredible stories of sacrifice, courage and contributions to the communities they live in.

There is a goodness that lives in our families, communities and neighbourhoods – to reach it we just need to walk beyond our fears. If we can go and build our homes there, raise our children there, look out for each other there, we will all live fortunate lives.

You and I, and our new neighbours.

Got a story to tell? Tweet us at @amnestyOz using the hashtag #mynewneighbour. 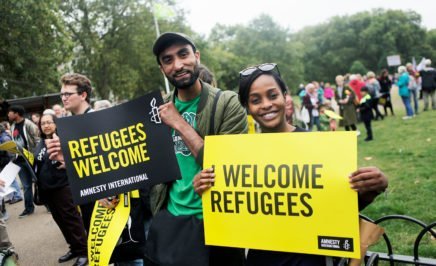 The Whittlesea council today marked a significant milestone in Australia’s response to the global...
Read More