Egypt’s National Security Agency (NSA), which specializes in policing terrorism and political cases, is increasingly using a well-honed pattern of unlawful summons, coercive questioning that amounts to cruel, inhuman or degrading treatment or punishment, and excessive monitoring/probation measures against human rights defenders and political activists, in an attempt to harass and intimidate them into silence, destroying lives, Amnesty International said in a new briefing published today.

The briefing “This will only end when you die” documents how the NSA used these measures to control the lives of 21 men and seven women between 2020 and 2021. The activists and human rights defenders said at every summons NSA officers regularly threatened them with arrest and prosecution unless they attended interrogations and raided the homes of those who failed to appear.

At least 20 described how living in constant fear of being detained by the NSA left them anxious and depressed, denied them key rights and severely disrupted their ability to lead a normal life. As a result, many are too scared to express their opinions or participate in political activities and some have been driven into exile.

“This new NSA tactic of persistent intimidation and harassment of activists, lawyers and NGO workers is one that is destroying lives. It prevents them from working, travelling and means they live under constant fear of arrest. NSA officials’ questions and threats reveal one clear objective: to stifle human rights and political activism,” said Philip Luther, Amnesty International’s Research and Advocacy Director for the Middle East and North Africa.

“This is yet another example of how NSA officers abuse their powers, brazenly denying freedoms and basic human rights. Impunity for NSA violations over the years has shown that there is no political will to end these abusive practices. For this reason, Amnesty International is calling on members of the UN Human Rights Council to urgently support the establishment of a monitoring and reporting mechanism on Egypt.”

The measures taken by the NSA against these activists, without judicial orders or legal grounds constitute a violation of international law and standards, as well as the Egyptian constitution and Code of Criminal Procedures.

NSA officers asked those summoned about their human rights or political activities and views, including those they expressed on social media. They were also asked about the activities and operations of opposition groups, political movements or human rights organizations which NSA officers suspected they were affiliated to and instructed to report about them. Those questioned were not allowed to be accompanied by lawyers.

During such interrogations, officers resorted to intrusive questioning about the personal lives and the political activism of those questioned, physical and psychological abuse which could amount to “cruel, inhuman or degrading treatment or punishment”, and unauthorized examination of phones and social media accounts. In most cases documented by Amnesty International, NSA officers threatened those summoned with imprisonment, torture and other physical harm against them and their families, if they refused to disclose information. They were also warned against exercising their rights to freedom of expression, association or peaceful assembly following the interrogation.

One human rights defender, who was summoned to the NSA in 2020, told Amnesty International: “He [NSA officer] asked me about the work of the organization, the director, funding and what I do… He said: ‘Listen… if I find that you are lying to me, you will never see the sun again’.”

Police instructed activists and human rights defenders, all of whom have already been detained for periods of up to three years for peacefully exercising their rights to freedom of expression, assembly or association, to regularly report to NSA offices in police stations or separate NSA premises, where they remained deprived of their liberty for hours or days without legal grounds or oversight from judicial authorities, or the possibility to seek remedy or redress.

These extrajudicial police probation measures, referred to as “monitoring” by NSA officers, amount to an arbitrary deprivation of liberty. They differ from court-mandated probation measures and are indefinite in nature, solely subject to the whims of NSA officers. In many cases those detained were tortured or otherwise ill-treated and their right to work and family life was severely disrupted.

It is impossible to determine the number of people subjected to NSA monitoring, as the practice is carried out without orders by judicial authorities and there are no official written records available. Lawyers interviewed told Amnesty International that many of their clients were released as early as 2015, but increasingly from 2019 were subjected to these practices.

“The countless victims of NSA’s abusive practices are unable to lead their lives with a sense of normality and security under the impact of persistent intimidation and threat of imprisonment. Activists are doubly punished for their lawful activism, having already been subjected to arbitrary detention. Egypt’s President Abdel Fattah al-Sisi and minister of interior must end this extrajudicial harassment of human rights defenders and activists,” said Philip Luther.

International law, the Egyptian constitution and Penal Code all prohibit torture and other ill-treatment as well as arbitrary or unlawful interference with a person’s privacy, family, home or correspondence.

Under the International Covenant on Civil and Political Rights, to which Egypt is a state party, no individual may be subjected to arbitrary arrest or detention and no one may be deprived of his or her liberty except on grounds and procedures established by law. Those detained must be promptly informed of the reasons of their detention and brought before a judge. They must also be able to challenge the lawfulness of their detention and be notified of their rights including the right to remain silent.

Victims found that there are no legal avenues that they could take to challenge these measures, report abuses or to seek justice, placing NSA officers above the legal system. They felt unable to lodge complaints before prosecutors or to publicly denounce their experience for fear of retaliation by NSA officers given well documented complicity by prosecutors in NSA violations. Interviewees repeatedly told Amnesty International that the officers acted with full confidence and boasted that there would be no repercussions for their actions.

The organization had previously documented the systematic failure of prosecutors to investigate allegations of torture and enforced disappearances by the NSA and role in arbitrarily detaining activists and human rights defenders solely on the basis of secret NSA investigation files.

Findings in the report question the seriousness of commitments outlined in Egypt’s national human rights strategy, which was launched in a ceremony attended by President Abdel Fattah al-Sisi on 11 September and vowed to uphold the rights to liberty, privacy and freedom of expression, association and peaceful assembly.

“The relentless harassment of human rights defenders and other activists exposes the Egyptian authorities’ recent adoption of a national human rights strategy to much fanfare as nothing more than a sinister attempt to whitewash their dismal human rights record,” said Philip Luther.

Amnesty International calls on the public prosecutor to open thorough and independent investigations into NSA abusive practices. Those responsible must be promptly held to account regardless of rank, status or position. President Abdel Fattah al-Sisi should instruct the minister of interior to immediately put an end to the extrajudicial harassment and summoning of human rights defenders and other activists, while the minister of interior should publicly denounce this practice. 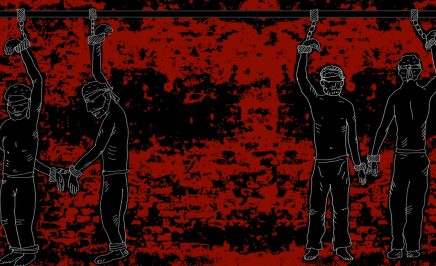 Despite the lifting of Egypt’s state of emergency, at least 36 men remain at risk of execution...
Read More

By Salil Shetty, Amnesty International’s Secretary General That which unites us is always greater...
Read More