With all eyes focused on the implementation of the recently agreed EU-Turkey deal, the plight of more than 46,000 refugees and migrants stuck in squalid conditions across mainland Greece, is in danger of being forgotten.

According to a new report from Amnesty International, Trapped in Greece: an avoidable refugee crisis, examines the situation of refugees and migrants – the majority women and children –trapped on mainland Greece, following the complete closure of the Macedonian border on 7 March.

“The decision to close the Western Balkans route has left more than 46,000 refugees and migrants in appalling conditions and in a state of constant fear and uncertainty,” said John Dalhuisen, Amnesty International’s Director for Europe and Central Asia.

“The decision to close the Western Balkans route has left more than 46,000 refugees and migrants in appalling conditions and in a state of constant fear and uncertainty.”

“EU States have only exacerbated this crisis by failing to act decisively to help relocate tens of thousands of asylum-seekers, the majority of whom are women and children, trapped in Greece. If EU leaders do not act urgently to live up to their relocation promises and improve conditions for stranded refugees and migrants, they will face a humanitarian calamity of their own making. © ARIS MESSINIS/AFP/Getty Images. Refugees and migrants on an inflatable boat arrive in Greece.

Of the 66,400 asylum-seekers pledged to be relocated from Greece in September 2015, only 615 had been transferred to other EU member states, according to information published by the European Commission on 12 April.

Conditions are inadequate in many of the 31 temporary accommodation sites. The sites, set up by Greece with significant EU assistance, have severe overcrowding, a complete lack of privacy, no heating, as well as insufficient sanitary facilities.

“The conditions here are not good and we are sleeping on the ground; our blankets are soaked with water. There are no bathrooms. This is why people are getting sick,” a Syrian woman who was nine-months pregnant told Amnesty International at a makeshift camp in Idomeni.

“It’s a total mess – there is nothing here… Everybody is sleeping on the floor in the old terminal hall. We don’t even have basic things. There is a toilet but it is so dirty. I don’t sleep in there – it’s too smelly,” an Afghan asylum-seeker staying at the Elliniko temporary accommodation centre, at an unused airport outside Athens, told Amnesty International.

Between 3,000 and 5,000 people daily have been staying at an informal camp in Piraeus port, Athens, with only a few basic services being provided by volunteers, a few humanitarian organisations and the port authorities. 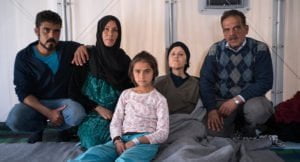 Many of the refugees and migrants interviewed during two research trips, between 8 February 2016 and 13 March 2016, were hoping to continue their journeys onwards to Western Europe to reunite with family members. The majority had little information about their options since the closure of the Macedonian border.

“Why don’t they let us go? They want us to die here? It’s cold and we are [living] on top of each other.” asked a 70-year-old couple from Aleppo, who were camping in Idomeni.

In addition to lacking information on their rights in Greece, refugees and migrants with specific vulnerabilities have gone undetected. Women said that they were not feeling safe and felt at risk of exploitation by men in some of the accommodation sites. Amnesty International also talked to unaccompanied children detained in police stations for up to 15 days until they could be transferred to a shelter for children.

Amnesty International is calling on Greece to urgently improve the country’s asylum system and ensure access to effective protection for everyone trapped in the country. As a priority, it must set up a mechanism for the systematic provision of information and the detection of individuals with special needs.

While EU member states should continue to support Greece so that it can adequately receive arriving asylum-seekers, they must also urgently accept asylum-seekers to their countries from Greece. This must include swiftly relocating large numbers of asylum-seekers through the existing EU emergency relocation scheme. The Hong Kong National Security law is dangerously vague and broad, and was forced through without...
Read More