David’s latest film “The Land Between” made in 2014 follows Sub-Saharan African migrants living in the mountains of Northern Morocco dreaming of entering Europe for a better life . The film premiered and was awarded “Best Feature-Length Documentary” at the FIFE International Environmental Film Festival in Paris, and has since screened widely around the world and won many other awards.

With unique and unprecedented access the film documents the everyday life and extreme hardships of these people who are prepared to risk everything, including their life, to leave their country, their family and friends, in search of a new and better life.

‘ I knew before I went (to Morocco), that I wanted to show people as people, that the top layer was to try and humanise the story. But I didn’t know where or how I’d shoot. Once I entered the ,mountains, though, I knew I’d never seen anything like it in my life.. the conditions were so extreme and the stories I was being told were very, very powerful.” David Fedele 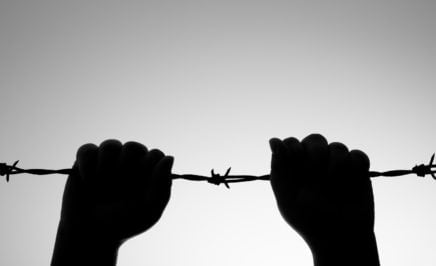