Fifteen years ago, a young man named Witek met a young woman named Joanna at a festival in Warsaw, Poland. Joanna had just returned from traveling through Africa, where she’d seen activists organising 24-hour marathon events to protest government’s abusing human rights. Witek invited Joanna to a meeting of his local Amnesty action group, and they decided to organise their own 24-hour marathon.Every year since, tens of thousands of Amnesty supporters, all around the world, have taken millions of actions to combat injustice.

One case is that of Nonhle Mbuthuma from South Africa. Nonhle is leading the fight for her community against an Australian mining company that wants to mine titanium on their ancestral land. “When you take my land, you take my identity,” she says. But she’s being harassed just for defending their rights.

These brave women around the world are risking it all to protect the rights of others. Join us to write letters to and on behalf of these women calling on their governments to listen to their requests.

Your words have the power to free people from human rights abuses.

Will you join us in defending them?

The event will run from 10am – 4pm, so please come and join us whenever! Light refreshments will be provided. 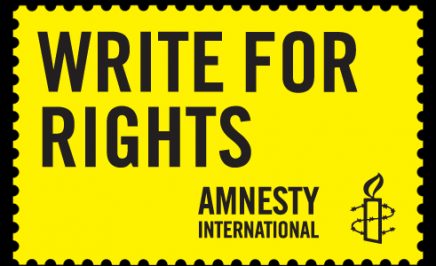