The last remaining family held in the Darwin Northern APOD, has finally been released into community detention after more than a year confined to a small, demountable cabin out the back of the Darwin Airport Hotel.

The family, who received refugee status in 2019, suffered more than six years in limbo on Nauru Island before being medically transferred to Darwin in February 2020. At the airport the elderly parents were forced to sleep in bunk beds in tiny cabins and the family were constantly monitored by up to a dozen guards.

Their release into community detention follows months of protests outside the Darwin Airport by refugee advocates and the community.

Over eight years ago, refugees made the dangerous journey to seek safety in Australia. They sought freedom and safety. Yet, when they arrived here they were met with a Government and a policy that has kept them detained for nearly a decade, both offshore and here in Australia.

But this week, because Amnesty supporters raised collective voice and keep fighting to challenge injustice, that freedom has finally been granted to some refugees. Yesterday the last remaining family detained in Darwin were flown to Brisbane for release into the community. Today, more refugees were released into the community from Melbourne and Brisbane.

“This is wonderful news for the Maghames family and the community in Darwin who have worked tirelessly for their release. The family have endured severe physical and emotional trauma after spending years in limbo, trapped in detention both here in Australia and on Nauru after fleeing persecution in Iran in 2013. Now finally, the family can start to live something resembling a normal life while awaiting third country resettlement and hopefully that starts with them getting the medical support they so desperately need.”

A coalition of rights groups have called for all the people being held in APODs, under...
Read More

Moz is seeking compensation from the Australian Government for his unlawful 14 month detention in...
Read More 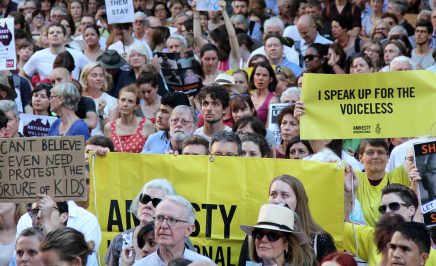 Khadija McCarthy-Naidoo, who is in year 12 at Methodist Ladies’ College, is a winner in our...
Read More

For almost eight years, the Australian Government has designed and maintained a deliberate system...
Read More