With inequality, injustice and hate speech seemingly ever more prevalent across the globe, you’d be forgiven for thinking 2019 has been a bad year for human rights. Yet, we have also seen some significant wins. Activists the world over have been galvanised to stand up and fight for our human rights – and thanks to their relentless campaigning we achieved some striking leaps forward. Here are some highlights…

Legal abortion services were finally available to women in Ireland, following an historic referendum in May 2018 that marked a huge victory for women’s rights. It was the result of years of dedicated work by activists, including Amnesty International, to encourage a powerful conversation that helped catalyse the abortion debate in Ireland. This ultimately led to greater protection for those people who need an abortion there, and paved the way for the same inspiring progress in Northern Ireland later in the year.

After spending 76 days in detention in Thailand, refugee footballer Hakeem al-Araibi was able to return to his home in Melbourne on 12 February. The Bahrain-born footballer had been detained upon arrival in Bangkok on 27 November 2018, due to an erroneous Interpol red notice, and faced the threat of extradition to Bahrain. A campaign launched by Amnesty and other groups to free the footballer, who is a peaceful and outspoken critic of the Bahraini authorities, grew into the #SaveHakeem movement. The campaign spanned three continents, engaging footballers, Olympians and celebrities, and drawing the support of more than 165,000 people.

Following international attention and campaigning by Amnesty, Saudi authorities overturned a call by the Public Prosecution to execute Saudi woman activist Israa al-Ghomgham for charges related to her peaceful participation in protests. Israa al-Ghomgham still faces a prison term, and Amnesty continues to campaign for her immediate and unconditional release.

In Ukraine, an International Women’s Day rally organized by human rights defender Vitalina Koval in Uzhgorod, western Ukraine, went ahead peacefully, with participants protected by police. The event marked a major change for the region, after similar rallies organised by Koval in previous years had been targeted by far-right groups, with police singularly failing to protect participants from violence.

AFRICOM admitted for the first time that its air strikes have killed or injured civilians in Somalia, after the release of Amnesty’s investigation The Hidden US War in Somalia: Civilian Casualties from Air Strikes in Lower Shabelle.Following this report, US military documents came to light confirming that the US authorities knew of further allegations of civilian casualties resulting from many of their air-strikes in Somalia.


Gulzar Duishenova had been championing disability rights in her country Kyrgyzstan for years. In March 2019, her persistence paid off when Kyrgyzstan finally signed up to the Disability Rights Convention. Amnesty supporters wrote nearly a quarter of a million messages backing her.

And in Iraq, just days after Amnesty and other NGOs raised the alarm about a draft cybercrime law that would seriously undermine freedom of expression there, the Iraqi parliament chose to withdraw the bill, confirming to Amnesty that its “concerns have been heard”.

In April, love triumphed when a ban on all LGBTI events in Ankara, Turkey, was lifted by the administrative appeals court. “This is a momentous day for LGBTI people in Turkey, and a huge victory for the LGBTI rights activists – love has won once again,” said Fotis Filippou, Campaigns Director for Europe at Amnesty International.

The District Court of The Hague issued an interim ruling in favour of Esther Kiobel and three other women who took on one of the world’s biggest oil companies, Shell, in a fight for justice. Esther has pursued the company for more than 20 years over the role she says it played in the arbitrary execution of her husband in Nigeria. Amnesty has shared over 30,000 solidarity messages with Esther Kiobel, and is supporting her Kiobel vs Shell case in The Hague. As a result of this hearing, the court in October 2019 heard for the first time the accounts of individuals who accuse Shell of offering them bribes to give fake testimonies that led to the ‘Ogoni Nine’ – who included Esther Kiobel’s husband – being sentenced to death and executed.

President of Equatorial Guinea, Teodoro Obiang Nguema, announced that his government would introduce legislation to abolish the death penalty.


Taiwan became the first in Asia to legalize same-sex marriage after passing an historic law on 17 May, with the first same-sex weddings taking place on 24 May. Together with LGBTI rights groups from Taiwan, Amnesty had campaigned for this outcome for many years. We are now working to end all discrimination against LGBTI people in Taiwan.

Qatar promised more reforms to its labour laws ahead of the 2022 World Cup. Human rights pressure also played a role in FIFA’s decision to abandon plans to expand the 2022 Qatar World Cup to 48 teams, which would have involved adding new host countries in the region. Amnesty worked together with a coalition of NGOs, trade unions, fans and player groups, calling attention to the human rights risks of the expansion, including the plight of migrant workers building new infrastructure.


Climate change activist Greta Thunberg and the Fridays for Future movement of schoolchildren were honoured with Amnesty International’s Ambassador of Conscience Award 2019. The Fridays for Future movement was started by Greta, a teenager from Sweden who in August 2018 decided to miss school every Friday and instead protest outside the Swedish parliament, until it took more serious action to tackle climate change.

In a long overdue move, Greece passed legislation to recognize that sex without consent is rape, and Denmark’s government committed to doing the same. This development is testament to the persistence and bravery of survivors and campaigners for many years, and creates real momentum across Europe following 2018 Amnesty’s review of outdated legislation in 31 European countries and other barriers to accessing justice for rape survivors.

From 1 June 2019, contraceptives and family planning clinic consultations became free of charge in Burkina Faso. The change was seen as a response to our 2015 My Body My Rights petition and human rights manifesto calling for these measures to be put in place. With financial barriers removed, women in Burkina Faso now have better access to birth control, and more choice over what happens to their bodies.

In a momentous and inspiring day for human rights campaigners, the UK parliament voted through a landmark bill on 22 July to legalize same sex marriage in Northern Ireland. The bill also forced the UK government to legislate for abortion reform in Northern Ireland, including decriminalization on the basis that a Northern Ireland Executive (government of NI) did not return in three months.

Also in July, in a US Congressional hearing, a senior Google executive gave the clearest confirmation yet that the company has “terminated” Project Dragonfly, its secretive programme to develop a search engine that would facilitate the Chinese government’s repressive surveillance and censorship of the internet. This followed Amnesty’s #DropDragonfly campaign, and hundreds of Google staff speaking out.

On 22 July, 70-year-old human rights defender and prominent Palestinian Bedouin leader Sheikh Sayyah Abu Mdeighim al-Turi was released from prison in Israel, after spending seven months in detention for his role in advocating for the protection of Bedouins’ rights and land. Sheikh Sayyah thanked Amnesty International and all those who took action on his behalf: “I thank you all very much for standing up for the right of my people and the protection of our land. While I was in prison, I felt and heard your support loud and clear, and it meant the world to me.”

Mauritanian blogger Mohamed Mkhaïtir, who was sentenced to death and held in arbitrary detention for more than five years after publishing a blog on caste discrimination, finally walked free.

In August, Saudi Arabia announced major reforms easing some of the major restrictions imposed on women under its repressive male guardianship system, including allowing them the right to obtain a passport which should make it possible for them to travel without permission from a male guardian. The changes also grant women in Saudi Arabia the right to register marriages, divorces, births and deaths and to obtain family records. While we welcome these changes, people campaigning for women’s rights remain in prison, and we must do all we can to fight for their freedom.

Syrian national Ahmed H. was finally allowed to return home, after being imprisoned and then held in immigration detention in Hungary for more than four years. He had been arrested on terrorism charges after being caught up in clashes on the Hungarian border. At the time he was helping his elderly parents, who were escaping Syria and were crossing into Hungary as refugees. An amazing 24,000 people joined the #BringAhmedHome campaign, calling on Cyprus to allow Ahmed to return to his family.

A court in Tunis acquitted 18-year-old activist Maissa al-Oueslati, after she faced trumped-up charges that could have resulted in her imprisonment for up to four years. Maissa and her 16-year-old brother had been arbitrarily detained by police earlier in the month for filming a protester threatening to set himself on fire in front of a police station.


At midnight on Tuesday 22 October 2019, after a last-minute effort by the DUP to overturn the bill, same sex marriage became legal in Northern Ireland, while abortion was decriminalised. All criminal proceedings were dropped, including those against a mother who faced prosecution for buying her 15 year-old daughter abortion pills online.

Grainne Teggart, Amnesty International’s Northern Ireland Campaign Manager, said it was the beginning of a new era for Northern Ireland, in which the nation was freed from oppressive laws that police people’s bodies and healthcare. “Finally, our human rights are being brought into the 21st century. This will end the suffering of so many people. We can now look forward to a more equal and compassionate future with our choices respected.”

Kurdish-Iranian award-winning journalist and refugee Behrouz Boochani arrived in New Zealand to attend a special WORD Christchurch event on a visitor’s visa sponsored by Amnesty International. It was the first time Boochani, known for his work reporting on human rights abuses from within the Australian government’s refugee detention centres, had set foot outside Papua New Guinea since he was detained on the country’s Manus Island in 2014.

Humanitarian volunteer Dr Scott Warren was found not guilty by a court in Arizona of charges linked to helping migrants on the US-Mexico border. In a similar case, Pierre Mumber, a French mountain guide who gave hot tea and warm clothes to four West African asylum seekers in the Alps, and was acquitted of “facilitating irregular entry”.

Alberto Fernández is inaugurated as President of Argentina on 10 December. As president-elect, Fernández announced he would push for the legalization of abortion as soon as he took office, saying: “It is a public health issue that we must solve.”

The Philippines’ Commission on Human Rights said that 47 major fossil fuel and carbon-polluting companies could be held accountable for violating the rights of its citizens for the damage caused by climate change. The landmark decision paves the way for further litigation, and even criminal investigations, that could see fossil fuel companies and other major polluters either forced to pay damages, or their officials sent to jail for harms linked to climate change.

The regional Economic Community of West African States’ (ECOWAS) Court of Justice rejected a 2015 ban imposed by the government of Sierra Leone preventing pregnant girls from sitting exams and attending mainstream school – and ordered the policy to be revoked with immediate effect. 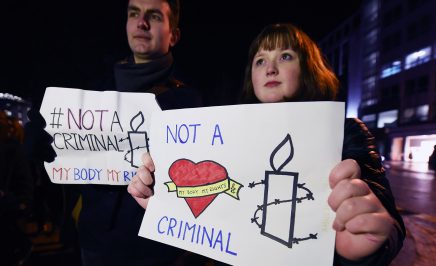 Australia’s embarrassment as Taiwan leaps ahead on marriage equality

Australia is dragging its heels on marriage equality, as Taiwan has taken a step closer to becoming...
Read More