21 March marks the International Day for the Elimination of Racial Discrimination and Harmony Day here in Australia. On this day committed to building a world of equality and dignity, Amnesty International Australia chats with star of Effie – The Virgin Bride, Mary Coustas to discuss Australia’s damaged global reputation.

Since British colonisation, Australia has had a troubled relationship with race. From the initial act of declaring the country to be terra nullius (or uninhabited), to the stolen generations of Aboriginal and Torres Strait Islander children removed from their families, there are many examples of institutional racism in Australia’s history.

Today, despite the multicultural make-up of Australian society – 28 per cent of Australia’s population was born overseas, according to 2016 data from the Australian Bureau of Statistics – there is still a lingering worldwide perception that Australians are a bunch of racists. This view was reinforced when US-based British comedian John Oliver visited our shores and described Australia as “one of the most comfortably racist places I’ve ever been in”.

In 2017, is this still a fair assessment of our country? 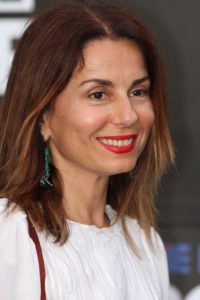 Logie Award-winning writer and performer Mary Coustas, best known for playing a stereotypical Greek-Australian in Acropolis Now, believes it’s fair to describe Australia as racist. “It’s not everywhere, but it’s there,” she says. “You expect better from us, you expect that we would have learnt from what happened in the past but unfortunately we haven’t.

“Anyone who feels overwhelmed by the presence of cultures they don’t have a personal connection to can look to blame whatever target is obvious. And the people that stand out are the ones who look different.”

Coustas first rose to prominence in the late 1980s with Wogs out of Work, a stage show that shone a light on Australia’s melting pot of cultures and reclaimed the word ‘wog’ from a racist insult to a badge of pride. She’s currently on tour with her one-woman show, Effie – The Virgin Bride, reprising her famous character from the original show.

She says she has personally experienced racism in the past, but not so much since becoming a public figure. “If it does happen, it hurts as much as the first time because it catches me off-guard,” she says.

Coustas believes racism in Australia has intensified in the 30 years since Wogs out of Work hit the stage. “Because of what’s happening around the world and the perceived threat of terrorism, it’s dialed up racism as people come to lazy and convenient conclusions,” she says.

“It comes in waves and everyone gets a ride on the racism train. It started with the Greeks and Italians and Lebanese, it went to Asians and now it’s focused on Muslims.”

Islamophobia is certainly more prominent than it used to be. Research by Western Sydney University’s Challenging Racism Program, highlighted in a recent SBS documentary, Is Australia Racist?, found anti-Muslim sentiment to be the most pronounced prejudice in Australian society today. In 1998, three percent of Australia’s population had negative views towards Muslims; now that proportion is 32 percent. More worryingly, 77 percent of Muslim women have experienced racism on public transport or the street.

Academic, journalist and TV presenter Waleed Aly, a Muslim Australian, has spoken out against racism in Australia in the past, arguing that the “polite racism of the educated middle class” is more dangerous than the extreme racist tirades on public transport occasionally captured on video.

Indigenous journalist Stan Grant is another prominent critic of racism in Australian society, grabbing headlines last year with a speech in which he argued that the “Australian dream is rooted in racism”. In one article published in The Guardian, Grant wrote: “Australians are proud of their tolerance yet can be perplexed when challenged on race, their response often defensive.”

Certainly in the field of sport, racism has been a long-standing complex problem. In recent times, Indigenous former AFL player and 2014 Australian of the Year Adam Goodes experienced booing and racist taunts for a number of years before quitting the game in 2015.

“There are serious consequences for those experiencing racism, including poor physical and mental health,” says Roxanne Moore, Amnesty International Australia’s Indigenous Rights Campaigner. “To tackle racism, Australia must fulfill its international obligations to protect against racial hatred, to promote understanding and harmony between cultures.”

“Australians are proud of their tolerance yet can be perplexed when challenged on race, their response often defensive”

Among all this evidence of racism, however, there is also counter-evidence that the majority of Australians celebrate the benefits of multiculturalism and inclusion. An annual survey of Australians’ attitudes to race and multiculturalism by the Scanlon Foundation and Monash University has consistently found that the bulk of Aussies believe that multiculturalism is good for the country – ranging from 83 percent to 86 percent in the surveys between 2013 and 2016.

Similarly, a majority of the population thinks migrants should be able to hang on to their cultural customs and traditions with only a minority (28 percent) believing that ‘it is best if all people forget their different ethnic and cultural backgrounds as soon as possible’. Instead, 66 percent agreed with the proposition that ‘we should do more to learn about the customs and heritage of different ethnic and cultural groups in this country’.

Increasingly, there is also a growing awareness of Australia’s treatment of Indigenous people, and the groundswell of calls to change the date of Australia Day from 26 January – the day Aboriginal and Torres Strait Islander people were dispossessed – to one all Australians can join in celebrating. One date circulated earlier this year by comedian Jordan Raskopoulos in a popular spoof video is May 8 – also pronounced ‘Maaate’.

In Coustas’ words: “I’m concerned, but I’m not pessimistic. Culturally, we have access to the world in our own communities. Ninety-five percent of the time it works brilliantly.”

By Andrea Sophocleous. Find out how you can get involved in Harmony Day at www.harmony.gov.au

This article was contributed by a guest blogger. This blog entry does not necessarily represent the position or opinion of Amnesty International Australia.
Join The Conversation