A surge in killings of people with albinism, whose body parts are used in ritual practices, has exposed a systematic failure of policing in Malawi and left this vulnerable group living in fear.

“The unprecedented wave of brutal attacks against people with albinism has created a climate of terror for this vulnerable group and their families who are living in a state of constant fear for their lives,” said Deprose Muchena, Amnesty International’s Director for Southern Africa.

“Malawian authorities have dismally failed them, leaving this population group at the mercy of criminal gangs who hunt them down for their body parts.”

Since November 2014, at least 18 people have been killed and at least five have been abducted and remain missing. Their bones are believed to be sold to practitioners of traditional medicine in Malawi and Mozambique for use in charms and magical potions in the belief that they bring wealth and good luck.

The macabre trade is also fuelled by a belief that bones of people with albinism contain gold.

Amnesty International believes that the actual number of people with albinism killed is likely to be much higher due to the fact that many secretive rituals in rural areas are never reported. There is also no systematic documentation of crimes against people with albinism in Malawi.

As well as extreme forms of violence, the report also finds that people with albinism in Malawi experience widespread societal discrimination including verbal abuse and exclusion from accessing basic public services. They are discriminated against in the education system and many die from skin cancer because of lack of access to preventative resources such as sunscreen and information about the condition.

There has been a steep upsurge in killings and abductions of people with albinism since November 2014. Women and children with albinism are particularly vulnerable to killings, sometimes targeted by their own close relatives.

The bloodiest month recorded by Amnesty International was April 2016 when four people with albinism were murdered. These include:

Whitney Chilumpha, who was just under two years old when she was snatched while sleeping with her mother in their home. Pieces of her skull, some teeth and clothing were found days later on a nearby hill. Five men, including Whitney’s father, were arrested on suspicion that they had been involved in her murder. 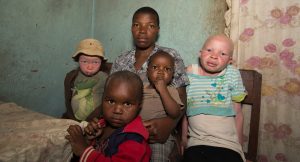 © LAWILINK/Amnesty International. A family in Malawi with one Albino child

On 30 April, Jenifer Namusyo, a 30 year-old woman, was found dead. She had been stabbed in the back, abdomen and elbow and her breasts and eyes had been removed. Days earlier 17 year-old Davis Fletcher Machinjiri was abducted by a group of men who trafficked him to Mozambique where they killed him and chopped off both his arms and legs and removed the bones.

The body of Enelesi Nkhata, a 21 year-old woman, was found by farmers buried in a shallow grave on 14 April 2016. She had been tricked by a relative into believing that he had found her a job in another district only to be stabbed in the chest and have her arms and legs cut off. At least 10 men, including her relative, were arrested for her murder.

“Most people who attack [people with albinism] are close relatives…I met one mother in Chitipa who was hiding her children out of fear. As a result, the children were not going to school.”

At least five people who were abducted are still missing. Two-year-old Iblah Pilo, was abducted at night in January 2015. His mother woke up to the cry of the child but could not save him. His great aunt told Amnesty International:

“We are worried that we do not know where Iblah is or where to find his grave. We want the truth to come out. This child must be the last to go missing.”

Even the dead are not left in peace with the Malawi Police Service recording at least 39 cases of illegal exhumation of the bodies of people with albinism or of people in possession of bones and other body parts taken from corpses. Amnesty International is concerned that some of these cases may in fact be cases of actual killings rather than mere grave robberies.

“Malawians need to reflect on a fresh understanding of the hardships experienced by this vulnerable group and ensure that people with albinism are accepted,” said Boniface Massah, Director of the Association of People with Albinism in Malawi.

According to the Malawi Police Service, at least 69 crimes against people with albinism have been documented since November 2014. However Amnesty International has found that the police lack adequate training and skills needed to investigate such crimes.

The Malawi Police Service lacks resources, such as transport, to respond in a timely way to reported crimes and maintain visible policing in districts reporting high numbers of attacks.

The Director of Public Prosecutions admitted to Amnesty International that the police prosecutors do not know all the relevant laws to deal with crimes against people with albinism.

There has been one case where the public took the law into their own hands and resorted to mob violence against suspected perpetrators. In March 2016 a mob burnt to death seven men in the Nsanje district bordering Mozambique after being suspected of trafficking body parts of people with albinism.

The authorities must take immediate steps to prevent, and publicly condemn mob justice attacks, as well as ensure that incidents of mob justice attacks are promptly, thoroughly, impartially and transparently investigated and that suspected perpetrators are brought to justice.

The increase in attacks and widespread discrimination coupled with ineffective policing has meant that many of Malawi’s population of between 7,000 and 10,000 people with albinism live in constant fear.

One woman told Amnesty International that the attacks have changed her life. “When I was growing up I believed that I could do anything. Now I am very sensitive. I cannot take a lift from strangers. In the past I was moving about without fear. After 5.30pm I have to go home. I don’t feel safe.”

“People tell me in my face that they will sell me. One time someone said I was worth MK6 million (US$10,000). I felt pained by the remarks that a price tag can be put on me.”

a woman in malawi

Exclusion and abuse within their own villages and communities is also a problem for people with albinism who are called names and threatened. Women with albinism are called Machilitso (cure) – feeding into the belief that having sex with a person with albinism can cure HIV. One woman told Amnesty International: “Without being brave you may end up throwing away the child because of the abuse and insults.”

Amnesty International is calling on the government of Malawi to adopt specific measures to protect the rights to life and security of people with albinism by providing increased levels of visible policing in rural districts and taking action when attacks against this population group occur.

All reports of crimes against people with albinism should be revisited, and thoroughly, impartially, independently and transparently investigated and suspected perpetrators brought to justice, in particular cases of people found with human bones.

“The time has come for the government of Malawi to stop burying its head in the sand and pretending that this problem will just go away. Talking will not end these attacks. Concrete action is urgently required,” said Deprose Muchena.

“Police have a duty to protect all people against crime. Failure to effectively investigate crimes against people with albinism promotes a climate of impunity, an environment where horrific killings can continue.”

Malawi experienced a sharp increase in human rights abuses against people with albinism including abductions, killings and grave robberies by individuals and criminal gangs since November 2014.

At least 18 people were killed and five abducted and are still missing.

According to Malawi Police Service, at least 69 cases involving crimes related to people with albinism have been reported since November 2014.

People with albinism are being targeted for their body parts, due to the belief that the parts have magical powers that bring good luck.

Malawi has a population of about seven to ten thousand people living with albinism.

Authorities must investigate the gruesome attack on Saturday on a woman with albinism and bring...
Read More

Thanks to people like you, last year we fought hard to defend human rights across the globe with...
Read More