Amnesty International speaks to a Syrian refugee in Lebanon who fled the war with her family for safety, only to be faced with poverty and uncertainty.

Six years of crisis in Syria, which began in March 2011, have been marred by horror and bloodshed. More than 20 percent of the Syrian population now live as refugees outside of their own country. This is the story of one of those people.

Maria* and her family left their hometown of Hama, Syria for Lebanon 18 months after the war broke out in 2011. 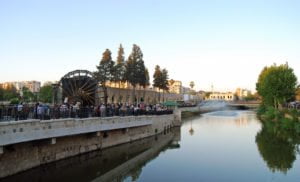 Maria’s home town of Hama, on the banks of the Orontes River in central Syria. © Flickr/Alessandra Kocman

They initially tried to hide in the country’s capital of Damascus, but that only lasted a few months before the fighting spiralled out of control.

“We held out as much as we could, none of us wanted to leave our homes and loved ones. I had a job I loved, my sister was still finishing her university degree … but it was getting too dangerous for us to stay,” she says.

“All of a sudden Christians and Muslims were turning on each other like never before, and women especially were being targeted — it was not safe for us anymore.”

Six years later, the violence in Syria has created 4.9m refugees, mostly women and children, who have desperately taken refuge in neighbouring countries like Jordan, Turkey, and Lebanon.

“I had a job I loved, my sister was still finishing her university degree … but it was getting too dangerous for us to stay.”

In Lebanon, Maria has managed to find a low-paying job to make ends meet, but for how long, no one knows.

According to the latest Amnesty International Annual Report, Syrian refugees in Lebanon face difficulties obtaining or renewing residency permits which would allow them to work, exposing them to a constant risk of arrest, detention and even forcible return to Syria. And according to a 2016 study by UNHCR, 70 percent of Syrian refugee households in Lebanon live below the poverty line. More than 50 percent live in substandard conditions in overcrowded buildings. 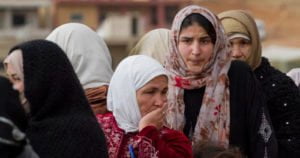 Syrian women waiting in line to register with the UNHCR. © Flickr/UNHCR Photo Unit

A recent report by the Freedom Fund also found that refugees in Lebanon are increasingly falling prey to slavery, child labour and sexual exploitation in a desperate bid to make ends meet.

Despite these conditions, Maria is grateful to have escaped the devastation they left behind in Syria. “I’m very grateful for the opportunity to be living and working here. I appreciate the efforts of the Lebanese people,” she says.

“But UNHCR is overwhelmed, and we are placing too much for a burden on Lebanon as it is. How long until it cracks under the pressure?”

Despite being severely under-resourced, Lebanon currently hosts over 1 million Syrian refugees. Job opportunities are scarce. Access to health and education services is extremely limited, and in most cases, non-existent for refugees.

“…UNHCR is overwhelmed, and we are placing too much for a burden on Lebanon as it is. How long until it cracks under the pressure?”

Maria’s eyes sparkle as she mentions visiting cousins in Australia. As though just the thought of Australia could inspire enough hope to help her deal with the situation she was in.

When other less resourced countries such as Lebanon and Turkey are able to provide a safe haven for hundreds of thousands of Syrians fleeing war and violence, Australia is more than capable of creating a new life for those whose lives have been utterly destroyed by war.

Amnesty believes it is well within Australia’s reach to provide at least 30,000 places per year to refugees like Maria, who can only dream of an improvement to her situation.

Amnesty International Australia provides support and guidance to refugees fleeing from devastation in countries such as Syria.