We are calling for a prompt, thorough and impartial investigation into the conduct of Myanmar’s security forces in the restive Rakhine state for human rights violations committed during ongoing security operations in the region.

Amnesty International has received numerous reports that Myanmar’s security forces operating in the state – home to most of the country’s oppressed Rohingya minority – are alleged to be involved in extra-judicial executions, arbitrary arrests and detentions, destroying people’s homes and crimes involving sexual violence amongst other violations.

Ongoing restrictions on access to northern Rakhine State has made it extremely difficult to independently verify such claims.

“We have received a series of alarming reports concerning Myanmar’s security forces and their conduct against the backdrop of security operations in Rakhine state,” said Rafendi Djamin, Amnesty International’s Director for South East Asia and the Pacific.

“Rather than issuing blanket denials without looking into the matter, the Myanmar authorities should implement an independent and impartial investigation that establishes a credible verdict on their human rights record and bring all those suspected of criminal responsibility to justice in fair trials before ordinary civilian courts without recourse to death penalty.”

The call comes as the authorities continue to heavily restrict access to northern Rakhine state, preventing journalists and independent observers from verifying reports.

Local journalists who travelled to the affected Maungdaw area following the eruption of violence in Rakhine state on 9 October have told Amnesty International that the Myanmar military severely impeded their movements, including by sealing off many of the areas affected by “clearance operations”.

Foreign journalists also told the organization that their requests for access to northern Rakhine state have been denied on the grounds that security operations are ongoing and authorities cannot guarantee their safety.

“If Myanmar’s security forces are not involved in any human rights violations as the authorities claim, then they should have no trouble granting independent observers access so they can help establish the truth on the ground,” said Rafendi Djamin.

On 25 October, the local media reported that Presidential spokesperson Zaw Htay had rejected allegations that security forces had committed human rights violations, insisting they were just “accusations” and that “we haven’t done anything lawless”.

Amnesty International also reaffirms its call for the Myanmar authorities to grant unfettered access to the UN and international humanitarian organizations who have been unable to provide assistance to communities in need.

Both Rohingya and Rakhine communities have been displaced following 9 October.

Amnesty International recognizes that the Myanmar authorities have the duty and the right to maintain law and order, and to investigate and bring to justice to those suspected of responsibility for the 9 October attacks.

However, they must ensure that these investigations are conducted in a fair and transparent manner, in accordance with international law.

Rohingyas in northern Rakhine State have for decades faced severe restrictions on their movement, impacting severely on their ability to access healthcare, education and livelihood opportunities.

This ongoing repression has sparked many thousands of Rohingya to flee and seek asylum abroad in recent years. 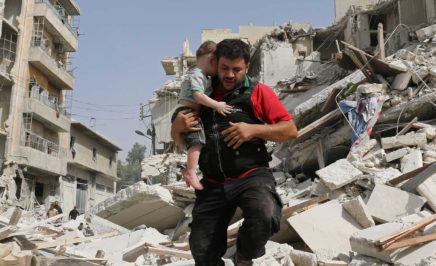 Fears for the safety of civilians in eastern and western Aleppo city are mounting amid the looming...
Read More