Global inequality and injustice have seldom been more starkly on display than in the days since the emergence of Omicron.

South African scientists first reported the new COVID-19 variant to the World Health Organization on 24 November. The next day the UK government was the first of many to introduce emergency travel restrictions on people from the Southern-African region. Surprisingly no such restrictions were imposed on the large number of other countries where Omicron cases were reported, including the UK itself.

After the world shut its doors to South Africa, and other southern African countries, it was revealed the new variant had been detected in western Europe in test samples as early as 19 November 2021. This was a week before South African scientists reported it to the WHO. But this did not prompt governments in the west to ease their restrictions on Southern African travellers, yet those in Europe and the UK were still free to travel.

The news of the Omicron variant and its classification by the WHO as a “variant of concern”, was potentially disastrous, signifying that the pandemic was entering a dangerous new phase, especially for low-income countries – mainly in Africa – with low vaccination rates. While some high-income countries have fully vaccinated nearly 90% of their populations, only 6% of people in low-income countries have received a single dose. The highly contagious Omicron variant could push these countries into crisis, yet according to the WHO only one in four African health workers has been vaccinated.

South Africa’s president Cyril Ramaphosa, during his address to the nation on 28 November, spoke out against the travel bans imposed on the country calling the decision “not informed by science” and “discriminatory”. He said the decision to prohibit travel was a “a clear and completely unjustified departure from the commitment that many of these countries made at the meeting of G20 countries in Rome last month.”

Ramaphosa also said the emergence of the Omicron variant should be a wake-up call to the world that vaccine inequality cannot be allowed to continue. This comes as South Africa looks at implementing mandatory vaccines, as the country battles to convince people to have themselves inoculated. Less than 30% of the South African population is fully vaccinated. A decision on the mandatory vaccines policy, which is supported by business, is expected to be made at the end of the week.

Important to note that as Amnesty International we do not support blanket mandatory vaccine policies and believe that in line with WHO recommendations governments should focus on voluntary uptake and that public awareness campaigns must be at the forefront of these efforts.

But the news of the emergence of a new variant was good for some. It resulted in a bonanza for western vaccine manufacturers, as it seemed to confirm that they will be providing booster jabs for years to come to combat future variants.

Moderna’s share price soared by 34 percent in just five days. Its CEO, Stéphane Bancel was quick to benefit, selling 10,000 shares on 26 November, making him a windfall of $3.19 million. Over this period, Mr Bancel’s overall shareholding in the company jumped in value by more than eight hundred million dollars, the campaigning group Global Justice Now reported.

Moderna’s main rivals fared similarly. US pharma giant Pfizer’s share price rose by 7.4 percent and its German partner, BioNTech, which originally developed its vaccine, saw an increase of 18.9 percent between 24 November and 29 November.

These rising share prices reflected the fact that since the start of the pandemic the three companies have chased profits, prioritizing sales to higher income countries.

These rising share prices reflected the fact that since the start of the pandemic the three companies have chased profits, prioritizing sales to higher income countries.

Pfizer has claimed that its “vaccine would be available to every patient, country and community that seeks access.” But this rhetoric has not been matched by actions. It continues to make misleading statements and reserve the bulk of its vaccines for wealthier countries, is still refusing to participate in technology sharing initiatives, such as the South African-based WHO mRNA technology hub, and has lobbied vigorously against efforts to lift intellectual property restrictions which would allow other manufacturers to ramp up production.

As a result, Pfizer has forecast that sales of its vaccine will hit $36bn this year, making it the single best-selling pharmaceutical of 2021, according to the Financial Times.

Moderna’s vaccine was only made possible with the help of US government scientists and a massive input of financial aid. Yet, even more than Pfizer, it has overwhelmingly distributed its vaccines to upper and upper-middle income countries. Moderna has forecast sales of its vaccines of up to $18 billion for 2021.

It did not have to be this way. There was nothing inevitable about this. Both Pfizer and Moderna made clear business decisions.

By contrast, the Anglo-Swedish company AstraZeneca has pursued a not-for-profit approach for its sales of the Oxford University-developed vaccine and pushed to distribute doses more fairly around the globe.

AstraZeneca’s approach is not perfect – it is also blocking the temporary lifting of IP rules. It can and must do more – as do other vaccine manufacturers – to ensure vaccine equality around the world and join the call for the TRIPs waiver to strengthen the supply chain.

As the events of the last few weeks have demonstrated, and numerous campaigners have warned, no-one is safe until we are all safe. The inescapable fact is that new variants will continue to emerge in unvaccinated populations.

This is a clear risk to global health and human rights, as well as the economy. But it is a sad reflection on how narrowly the market assesses value that Pfizer, BioNTech and Moderna, which have contributed to this crisis have been rewarded with share price hikes, while AstraZeneca’s share price actually went down after Omicron was reported.

Until pharmaceutical companies stop putting profit before life, developing countries, which include those on the African continent will continue to bear the brunt of the Covid-19 pandemic and its consequences. 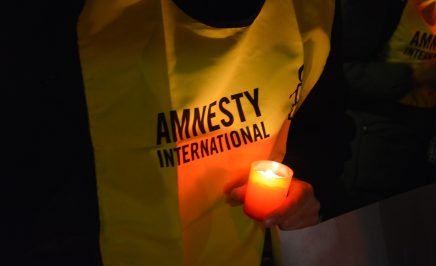 Experts have warned that an unequal distribution of vaccines around the world would only...
Read More

Death penalty 2015: the good and the bad

The first six months of 2015 have seen starkly contrasting developments on the death penalty. While...
Read More