We look back on the key events as they unfolded, from the height of the crackdown in July last year, to reactions from the international community as the extent of the sweep became clear, and to the subsequent release of some of those affected this year. 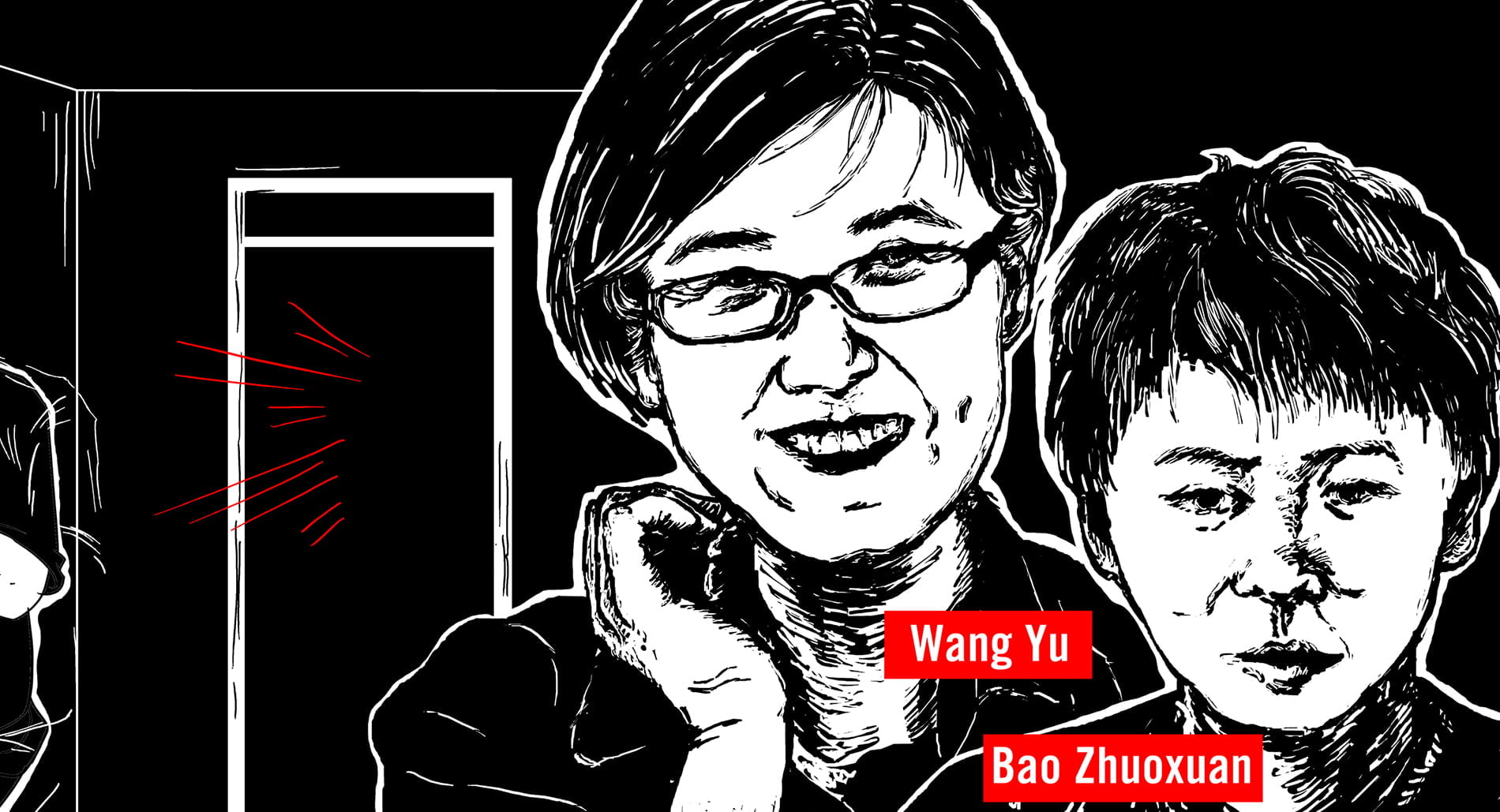 Prominent human rights lawyer Wang Yu goes missing in the early hours after sending panicked phone messages to friends. The messages state that her internet and electricity have been cut off, and that people are trying to break into her home. Her husband Bao Longjun and their 16-year-old son, Bao Zhuoxuan, are also missing. Wang Yu works at Beijing Fengrui, a law firm that handles many sensitive human rights-related cases.

A group of more than 100 lawyers and activists sign a joint statement condemning her disappearance. Public security officers across the country begin detaining and questioning what would eventually be hundreds of lawyers and activists, including 14 employees of Beijing Fengrui.

Well-known Guangzhou-based lawyer Sui Muqing is held at an undisclosed location on suspicion of “inciting subversion of state power”, a serious criminal offense that carries a potential 15-year jail term. The People’s Daily, the official newspaper of the Chinese Communist Party, describes the crackdown as an operation to destroy a “major criminal gang”. Rights activists Wang Fang and Yin Xu’an are arrested on suspicion of “picking quarrels and provoking trouble”, a catch-all charge often used to silence critics, after they posted online photos of themselves wearing T-shirts with activist Wu Gan’s image to protest his detention. Bao Zhuoxuan, the teenage son of Wang Yu, attempts to flee China to study abroad, but is taken away by uniformed officials in the border town of Mongla, Myanmar along with Xing Qingxian and Tang Zhishun, two activists accompanying him.

The UN Committee against Torture (CAT) voices concern over China’s crackdown on human rights lawyers and activists, saying it is “unprecedented”.

A total of 13 lawyers and activists, including some previously detained, are formally arrested on state security charges.

Prominent lawyer Sui Muqing is released, the first lawyer among those targeted to be granted bail.

UN Human Rights Chief Zeid Ra’ad Al Hussein says he has raised concerns with China on the “worrying pattern” of arrests and intimidation of lawyers and critics in the country.

12 countries release a joint statement at the UN Human Rights Council expressing concern over the deteriorating human rights situation in China as a result of the ongoing crackdown. They highlight that many individuals affected have been denied access to lawyers or visits by family members.

A total of 18 human rights lawyers and activists remain detained and under arrest.

*All figures are correct to the best of Amnesty International’s knowledge, however as verification is difficult, not all information may be up to date. For latest information of the crackdown, please refer here.

So who are they?

The human rights lawyers and activists caught up in China’s crackdown have been referred to in Chinese state media as part of a “major criminal gang”, troublemakers or otherwise had their characters assassinated. Many of them face charges of trying to subvert state power. To their friends and families however, they are mothers and fathers, daughters and sons, brave enough to be involved in human rights cases stigmatized by authorities. We put a face to a few of them.

Described as “courageous and fearless” by those who know her, prominent Chinese human rights lawyer Wang Yu’s activism was triggered by a personal experience of injustice.

Facts can’t be easily turned around, how can we allow the truth to be covered up!

In 2008, Wang Yu was assaulted in the northern city of Tianjin for demanding to board a train for which she held a valid ticket. She lodged a police report but was subsequently imprisoned for two-and-a-half years. While jailed, she witnessed the mistreatment and torture of prisoners. This sparked a tireless career defending key human rights cases the Chinese government considered “sensitive”, including defending high profile Uighur scholar Ilham Tohti and taking on the case of human rights activist Cao Shunli who died in detention after being denied adequate medical help.

“She (Wang Yu) is the bravest and the most upright and selfless human right lawyer.”

Also a human rights advocate, Wang Yu’s husband Bao Longjun kickstarted his activism during her imprisonment working to secure her release. After Wang Yu’s release in 2011, both became active representing some of the most sensitive legal cases in China.

Both are being detained on charges relating to state security and denied access to lawyers and family members.

Like Wang Yu, Wang Quanzhang is a lawyer at the Beijing Fengrui law firm and has defended human rights cases considered sensitive by the Chinese government, including practitioners of Falun Gong, a spiritual movement persecuted and outlawed in China. He has also taken up cases involving members of the New Citizens’ Movement, a loose network of grassroots activists that were persecuted beginning in 2014.

“For the past half year, we have fruitlessly explored all legal channels in search of a remedy. It’s so easy for you (Chinese authorities) to create an unjust case; for us to pursue this through legal channels is like trying to ascend to the heavens.”

For representing such ‘pariah’ cases, he has seen his fair share of intimidation, including being expelled from a courtroom while representing Falun Gong clients and being beaten by police.

On 10 July last year, he was taken away by security officers during a roundup of Beijing Fengrui staff. He was placed under residential surveillance and subsequently formally arrested in January this year on the charge of “subverting state power”. Like Wang Yu and Bao Longjun, he has been denied access to lawyers and family members since being detained.

A lawyer with Beijing Global Law Firm, Li Heping has, like many of those affected in China’s crackdown, accepted cases considered sensitive and which many would not touch in mainland China. This has included defending Christians, Falun Gong adherents, well-known dissident and human rights attorney Gao Zhisheng and blind activist Chen Guangcheng.

“He’s no hero, he’s just an ordinary person. What exactly has he done? While the whole of China’s judicial system is dealing in the lives of ordinary citizens, he chose to say “no”.”

For his work in human rights, he has been recognized by the U.S. Congress-funded National Endowment for Democracy and the Council of Bars and Law Societies of Europe. He too was caught up in last year’s widespread sweep. Placed under residential surveillance after being taken away on 10 July, he was formally arrested on 8 January this year. A month after his arrest, Li Heping’s attorneys were informed that he dismissed them, although they have been unable to verify this with him personally.

Harbouring a desire to help the vulnerable, 25-year-old Zhao Wei got involved in campaigning on social issues while a journalism student in eastern China. Her blossoming interest in human rights issues in China spurred her to join Beijing Global Law Firm after graduation and she worked as a legal assistant to detained human rights lawyer Li Heping.

“She has no army, neither is she calling for an insurrection. At most, she’d made some remarks about freedom of speech, how can this be subverting state power?”

She was detained by Chinese authorities on 10 July last year, the same day Li Heping was taken away, and was formally arrested on 8 January on the charge of “subverting state power”. Since then, Chinese authorities have attempted to obstruct Zhao Wei’s lawyer from carrying out his work. Requests made by her lawyer and family to prison authorities to investigate reports that Zhao Wei could have been sexually harassed in detention have also gone unanswered. Commitments made by Prime Minister Malcolm Turnbull at the Obama Summit in New York last night are...
Read More