Sudanese security forces have intensified their use of lethal force over the past two weeks to quell protests against a military takeover of power last month, carrying out dozens of unlawful killings and leaving at least 50 people with gunshot wounds, Amnesty International said today.

According to the Sudanese Doctors’ Committee, a group monitoring the situation, at least 40 people were killed mostly by live ammunitions during demonstrations in the capital Khartoum since 25 October, when army leader Lt. General Abdel Fattah al-Burhan declared a nationwide state of emergency, dissolved the cabinet and arrested dozens of civilian politicians.

“The escalation in the use of lethal force by the security authorities in Sudan in the past two weeks was calculated to intimidate and quell protests from the streets against a military takeover of power last month.” said Deprose Muchena, Amnesty International’s Director for East and Southern Africa.

The escalation in the use of lethal force by the security authorities in Sudan in the past two weeks was calculated to intimidate and quell protests from the streets against a military takeover of power last month.

Security forces intensified the use of lethal force to counter organized protests in the capital Khartoum on 13 and 17 November, killing at least 23 people, according to the Sudanese Doctors’ Committee.

Since the military took power in Sudan last month, security forces have increasingly used live ammunition and teargas to disperse widespread protests. An agreement signed on 21 November resulted in reinstating civilian Prime Minister Abdalla Hamdok who said following his re-appointment that the authorities would conduct “an independent and transparent investigation into all the violations” that happened since 25 October.

“Given the past poor track record of Sudanese authorities in investigating similar violations in the past, any investigation into these violations must be monitored and assisted by international observers, to ensure that it produces credible results,” said Deprose Muchena.

Escalation of lethal force against protesters

Research by Amnesty International confirmed that nine of the slain protesters had all died of gunshots that targeted their heads, necks and chests on 13 and 17 November, including one from sniper bullets, as well as at least 50 cases of injuries from gunshot wounds. At least one was shot by a sniper. The use of lethal force was unwarranted since they were all unarmed. The organization has also established that security agents raided hospitals.

On 13 November, four protesters were killed, of which three of whom died of gunshot wounds and one from teargas suffocation, according to the Sudanese Doctors’ Committee. Amnesty International confirmed that at least one of these protesters was killed by sniper fire.

18-year-old secondary school student Elshaikh Youssef was marching with his friends on 40th Street in Omdurman, Khartoum’s twin city, when he told his friends that he had spotted a sniper on one of the rooftops. As Elshaikh pointed upwards he was shot with a bullet that came from the same direction, a family member and his friends told Amnesty International.

By the time his friends brought him to the hospital, Elshaikh was already dead. An autopsy confirmed he had died from a gunshot wound to his shoulder which pierced his chest and heart.

One of Elshaikh’s close relatives told Amnesty International that “I’m devastated. I’m close to losing my faith in God. How could something like this happen?!”

This confirms multiple reports by Sudanese activists of snipers shooting at protesters from rooftops, aiming their bullets at their heads and chests.

“These killings demonstrate that there is a deliberate and targeted plan by the authorities to suppress the protests at all costs,”

“An independent and impartial investigation is needed to ensure that perpetrators are brought to account through courts in fair trials.”

Security forces went further with their violence on 17 November, killing at least 15 protesters as per the count of the Sudanese Doctors Committee. Between 1:45 – 5:15 pm on 17 November, the International Hospital in Khartoum North received eight cases of people shot; three with gunshots to the chest, three with gunshots to the head, and two shot in the neck. All of them later died, an on-duty hospital staff told Amnesty International.

Other protesters bled to death before reaching hospital. A female protester, 25-year-old Sit al-Nafar Bakar, was killed when she was shot in the face while running away from police in Khartoum North at around 4h00 pm. A close family member told Amnesty that the victim was a nursing student, a dedicated activist, and “a very humble and courageous girl who was always at the forefront of protests. Those who knew her told Amnesty International that she used to say that she was protesting for a civilian state and that if she died, “get justice for me.”

Another protester killed by live ammunition on the same day was Muzamil al-Jinaid, a 32-year businessman. He was shot dead at around 4:30 pm in Khartoum North. “No one witnessed what happened. We just received a call telling us to come to the hospital to identify a body. When we arrived, we found his dead body with gunshots wounds in it,” a close family member told Amnesty International.

The violence follows a long-standing pattern of security forces using excessive and deadly force including by shooting live ammunition at protesters to break up demonstrations in Sudan. However, this pattern greatly escalated to counter protests by unarmed civilians since the military takeover.

“The increase in killings last week confirms Sudan’s security leaders are disregarding the right to life, peaceful protest, and shows contempt for legal norms governing the use of force,” said Deprose Muchena.

Meanwhile, military authorities continued to arrest civilian politicians and activists, adding to dozens who have already been arbitrarily detained across the country since 25 October. However, a handful of detainees have been released since the political agreement was signed on 21 November.

Nour Al-Din Salah, a senior member of the Sudanese Congress Party, was arrested at midnight on 16 November when a group of armed security agents forced their way into his house in Khartoum. His family members told Amnesty International that they blindfolded him and took him away. The arrest took place just hours after Salah appeared in an interview aired by Al-Jazeera Arabic, in which he criticized the military’s takeover of power. His sister told Amnesty International that they are demanding information about his whereabouts and the charges against him.

Amnesty International and Human Rights Watch confirmed in a joint statement on 9 November that at least eight detainees were being held in undisclosed locations, without access to family or legal counsel in circumstances that may amount to enforced disappearances. One of them, however, has been reportedly released.

Authorities have also been disrupting internet and telecommunications since 25 October to limit people’s ability to plan and document protests. The internet was cut for more than three weeks, while phone lines were cut for hours on 17 November. The services were restored on 18 November.

“If they continue on their current course, we are clearly going to lose more lives. Authorities must be held accountable, including individuals who bear the greatest responsibility for these serious abuses.” 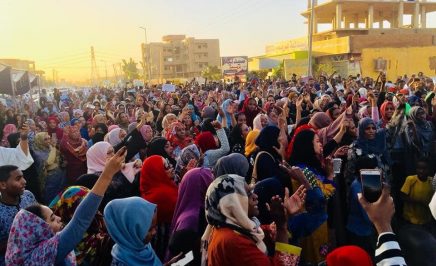 Sudan: All security agencies that attacked protesters must be held to account

An Amnesty International investigation has found that Sudan’s crackdown on protests against the...
Read More