The Turkish prosecution’s decision to charge Taner Kiliç, the Chair of Amnesty International Turkey, with “membership of a terrorist organisation” is a mockery of justice, and highlights the devastating impact of the Turkish authorities’ crackdown following the failed coup attempt in July last year.

Taner Kiliç became the latest victim of the government’s sweeping purge after he was detained in the early hours of Tuesday on suspicion of involvement with the Fethullah Gülen movement, together with 22 other lawyers based in Izmir. At his court hearing in the western Turkish city early this morning Australian time (Friday local time), he was charged with membership of the “Fethullah Gülen Terrorist Organisation” and remanded in pre-trial detention. Amnesty International is demanding his immediate and unconditional release.

“Taner Kiliç is a principled and passionate human rights defender. The charges brought against him today are completely without merit. They show just how arbitrary, just how sweeping, the Turkish government’s frenzied pursuit of its perceived enemies and critics has become. He must be released immediately and the charges against him dropped,” said Salil Shetty, Amnesty International’s Secretary General.

“Taner’s arrest highlights not just a disregard for human rights, but a desire to target those who defend them. We are calling on all those in Turkey and around the world who care about human rights to speak up for a courageous campaigner who has dedicated his life and now sacrificed his liberty in their cause.”

On Thursday, eight lawyers in the case were remanded in pre-trial detention. One was released on bail. Seven other lawyers were taken to the courthouse at the same time as Taner Kilic, but were still awaiting a decision on their cases. A further six remain in police custody.

The only claim presented by the authorities purportedly linking Taner Kiliç to the Gülen movement is that Bylock, a secure mobile messaging application that the authorities say was used by members of the “Fethullahist Terrorist Organization” was discovered to have been on his phone in August 2014.

No evidence has been presented to substantiate this claim, and Taner Kiliç denies ever having downloaded or used Bylock, or even having heard of it, until its alleged use was widely publicized in connection with recent detentions and prosecutions.

“Taner Kiliç is neither a supporter nor a follower of the Fethullah Gülen movement and has in fact been critical of its role in Turkey. The only evidence brought against him is the alleged presence on his phone of a secure communications platform that would not, even it were true, be evidence of a criminal act. He must not face trial on the basis of such flimsy and inadequate accusations,” said Salil Shetty.

“Amnesty International will campaign tirelessly for Taner’s release, and continue its work in and on Turkey undeterred.”

Police arrived at the Izmir home of Taner Kiliç, who has served on the board of Amnesty International Turkey for various periods since 2002, on Tuesday morning, searching his home and later his office. A detention order was issued against him along with 22 other lawyers, referring to an investigation into suspected members of the “Fethullah Gülen Terrorist Organization”.

Taner Kiliç’s arrest has drawn widespread international condemnation, including from the US State Department, the EU, Germany’s Human Rights Commissioner and Denmark’s Minister of Foreign Affairs, and international and domestic human rights organisations.

Taner Kiliç’s detention takes place in the context of an escalating crackdown on human rights by the Turkish authorities, following a failed coup attempt on 15 July 2016. Tens of thousands of public sector employees have been dismissed and hundreds of journalists and media workers detained. Hundreds of media outlets and NGOs have been shut down.

The Turkish government blames the coup attempt on Fethullah Gülen, a US-based cleric, and has since designated his movement a terrorist organisation. This has paved the way for thousands of people with no involvement in the coup attempt to be arbitrarily detained.

Turkey: State of emergency must not roll back human rights

President Erdogan’s announcement of the imposition of a state of emergency must not pave the way...
Read More 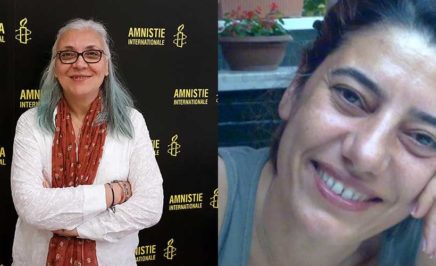 Ahead of Sunday’s parliamentary and presidential elections in Turkey, Amnesty International has...
Read More