Companies all over the world are still profiting from the sale of gruesome torture equipment such as spiked batons, stun belts and leg irons, Amnesty International said today, as it called on world leaders to join the Global Alliance for Torture-Free Trade, a landmark agreement launched in 2017.

The Global Alliance’s 58 member states have committed to controlling and restricting exports of goods which can be used for torture or other ill-treatment. Amnesty International’s Secretary General Kumi Naidoo will later today address the first ministerial meeting of the Global Alliance at the UN headquarters in New York

“It’s been decades since torture and other ill-treatment was outlawed internationally, so why is equipment that is designed solely to inflict pain and fear still being traded around the world? Loose regulations mean that companies are still profiting from the sale of horrible tools like spiked batons and stun cuffs. It’s simple – as long as this equipment is on the market, it will be used by torturers,” said Ara Marcen Naval, Advocate for Arms Control and Human Rights at Amnesty International.

“Creating the Global Alliance was a major achievement for anti-torture campaigners, and we are calling on more states to join this week. Banning torture and other ill-treatment but turning a blind eye to the tools used to carry them out is not good enough. States must come together to finish the job and put a stop to this sinister trade for good.”

Amnesty International has been a key voice advising on regional and international regulations to combat the trade in tools of torture. Together with the Omega Research Foundation, the organisation released a briefing today setting out recommendations.

“Banning torture and other ill-treatment but turning a blind eye to the tools used to carry them out is not good enough. States must come together to finish the job and put a stop to this sinister trade for good” – Ara Marcen Naval, Advocate for Arms Control and Human Rights at Amnesty International

Amnesty International and its partner Omega Research Foundation believe that in order to be fully effective, any legislation aiming to tackle this trade should have a two-pronged approach. It should ban inherently abusive equipment, while regulating equipment which may have a legitimate purpose but which is commonly abused for torture or other ill-treatment.

Amnesty International is calling for an absolute ban on inherently abusive law enforcement equipment, which covers items such as neck restraints, weighted or spiked batons, stun gloves and body-worn electric shock devices. However there also needs to be much more stringent controls on equipment that may have a legitimate use, but which can easily be misused. This includes restraint devices, riot control agents such as tear gas, and standard striking weapons like truncheons and batons.

Amnesty International has repeatedly documented how common law-enforcement equipment can be used to torture or otherwise ill-treat people. For example, countries including Israel, Bahrain, Turkey and Colombia have used tear gas against peaceful protesters in an excessive and abusive manner, often causing serious injury.

Amnesty International is calling on states to assess the risks before granting authorisations of these types of equipment, in line with other trade-control regimes of dangerous goods, such as conventional arms.

“Law-enforcement weapons and devices should never be supplied to recipients who are likely to use them for torture, other ill-treatment or other serious human rights violations,” said Ara Marcen Navel.

“We are urging the Global Alliance and its member states to commit to regulating equipment that could be used to torture or ill-treat people. This includes immediately establishing international standards to make it harder for companies to export such tools.” 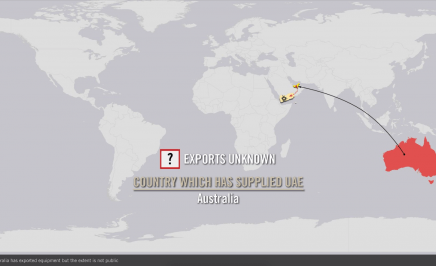 Iraq: US admits failures to monitor over $1 billion worth of arms transfers

The US Army failed to keep tabs on more than $1 billion (AUD$1.3 billion) worth of arms and other...
Read More