We’re well into Write for Rights for 2018 now, and as we gear up for International Human Rights Day on 10 December, we wanted to share some of the amazing things that activists and action groups have been up to around the country. From gigs to festivals to dinners and more, check out the latest on what’s been happening and preview some of the awesome events still coming up. The team from Wagga Wagga have had a great start to Write for Rights 2018! Kicking things off at Fusion Multicultural Festival in October, the team collected 140 actions for Write for Rights. They followed this up in November with two back to back Write for Rights Nights. They signed action, wrote solidarity cards and brought their total action count up to 300 so far! 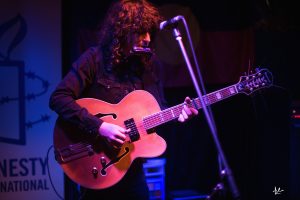 Some of Adelaide’s best local talent hit the stage a couple of weekends ago in support of Write for Rights. Under the banner of Bravery Live, each band selected a Write for Rights case to profile, and shared with the audience why that case connected with them. Massive thanks to Naomi Keyte, Aidan ‘Jazzy’ Jones, and Minority Tradition for making an afternoon of action taking sound pretty amazing. 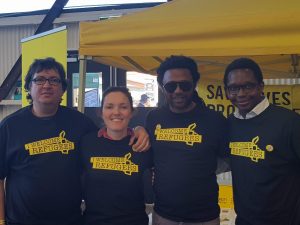 Lead activists from Victoria headed to Seaworks in Williamstown for the 2018 Jamaican Music & Food Festival. The team had a really amazing day talking about Write for Rights and My New Neighbour with festival goers – and by the end of the day had collected 575 actions! For their first ever stall, the newly formed Women’s Rights Network took Write for Rights to the Davies Park Markets in Brisbane and really hit the ground running collecting 360 Write for Rights actions at the market.

If you’re in Fremantle this weekend and keen for a great event, make sure you head to Beats for Bravery at the Fremantle Arts Centre -Featuring live music, a limited edition art auction and guest speaker Kate Kelly of the Save Beeliar Wetlands movement, Beats for Bravery will give you the perfect opportunity to take action for Write for Rights.

This is a just a snapshot of the amazing Write for Rights events and actions that are happening right across the country. Looking for something to near you? Head to https://www.amnesty.org.au/events/ to find out the latest events and get involved in Write for Rights.