The international community must stand by its long-term commitment to support women’s rights in Afghanistan, said Amnesty International, ahead of a new campaign highlighting the achievements of 16 remarkable Afghan women.

To mark this year’s 16 Days of Activism against Gender-Based Violence–an annual international campaign celebrating women in every region of the world who fight gender-based discrimination and stand up for women’s rights–the human rights organization is sharing the stories of 16 trailblazing Afghan women who had overcome huge barriers to participation across public life over the past two decades. In their own words, women from diverse public spheres including law, politics, academia, and the media recount their professional paths, their feelings about the Taliban’s return, their hopes and fears for the future, and their recommendations to the international community on how to continue supporting women’s rights.

“These stories offer a powerful and timely reminder of just how far Afghan women had come over the past twenty years, in the face of seemingly insurmountable obstacles.

“They also provide a sobering insight into how life has transformed for women and girls since the Taliban’s return,” said Samira Hamidi, Amnesty International’s South Asia Campaigner.

“It’s astonishing that, at a time the country is facing an economic and humanitarian crisis, these women and thousands more like them are being barred from public life. We urge the Taliban to respect, protect and fulfil the rights of women and girls. We call on the international community to engage directly with Afghan women to understand their reality, listen to their pragmatic recommendations, and work with them to support women’s rights.”

Since taking control of Kabul on 15 August 2021, the Taliban have imposed severe restrictions on women and girls. Apart from healthcare workers and a few other isolated exemptions, women have been told they cannot return to work or travel in public without being accompanied by a Mahram (male guardian). Since 20 September, girls above the age of 12 (grade six and above) have not been allowed to go to school, while rigid gender segregation at universities has severely curtailed women in higher education.

Businesswoman Sediqa Mushtaq told Amnesty International, “When I heard the news that the Taliban had entered Kabul, I felt as if I fell and broke into pieces. I fell from a bright place into darkness with no light to be seen.”

Preventing women from working has exacerbated economic problems for many families, which had previously enjoyed steady professional incomes, while removing women from government jobs has left a huge hole in the state’s capacity to govern effectively. Women now also face increased threats of gender-based violence and severe restrictions on their rights to freedom of assembly and freedom of expression, including on even their choice of clothing.

Fawzia Amini, formerly a senior judge in Afghanistan’s Supreme Court, said: “The Taliban have institutionalized discrimination against women; they are denying our fundamental rights…they want to wipe women from the face of society and make us all prisoners in our own homes.”

While much work remained to be done, women’s rights had improved significantly since the fall of the first Taliban regime in 2001. There were 3.3 million girls in education, and women had actively participated in the political, economic and social life of the country. Despite ongoing conflict, Afghan women had become lawyers, doctors, judges, teachers, engineers, athletes, activists, politicians, journalists, bureaucrats, business owners, police officers, and members of the military.

Former police officer, Zala Zazai, said: “The international community must pressure the Taliban to ensure women’s rights and they must do everything to ensure that women are part of the new government. The Taliban cannot eliminate half of the population of Afghanistan.”

The briefing, “They are the Revolution”: Afghan Women fighting for their future under Taliban rule, is available here.

The 16 Days of Activism against Gender-Based Violence is an annual international campaign, which starts on the International Day for the Elimination of Violence against Women on 25 November and runs until Human Rights Day on 10 December. It provides a platform for individuals and organizations around the world to call for the prevention and elimination of violence against women and girls. 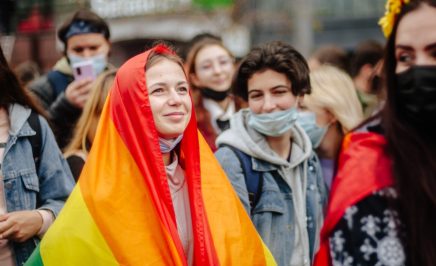