New research by Amnesty International has revealed the alarming impact that abuse and harassment on social media are having on women in Australia, with women reporting stress, anxiety, or panic attacks as a result of these harmful online experiences.

The organisation commissioned an Ipsos MORI online poll which looked at the experiences of 502 women between the ages of 18 and 55 in Australia.

“The internet can be a frightening and toxic place for women. It’s no secret that misogyny and abuse are thriving on social media platforms, but this poll shows just how damaging the consequences of online abuse are for the women who are targeted,” said Azmina Dhrodia, Amnesty International’s Researcher on Technology and Human Rights.

“This is not something that goes away when you log off. Imagine getting death threats or rape threats when you open an app, or living in fear of sexual and private photos being shared online without your consent. The particular danger of online abuse is how fast it can proliferate – one abusive tweet can become a barrage of targeted hate in a matter of minutes. Social media companies need to truly start taking this problem seriously.”

Amnesty International polled women in Australia describing themselves as moderate to active internet users about their experiences of online abuse and harassment.

Two-fifths (42%) of women responding to the survey who had experienced online abuse or harassment said it was misogynistic or sexist in nature, and a fifth (20%) said it had included threats of physical or sexual violence.

Nearly half (48%) of survey participants who had experienced online abuse or harassment said it had included racism, sexism, homophobia or transphobia.

More than half (54%) of women who had experienced abuse or harassment online said it came from complete strangers. About a third (32%) said that the abuse they experienced online came from people they knew offline, with about half as many (15%) saying it came from a current or former partner.

Around a quarter (24%) of women surveyed who said that they had experienced abuse or harassment online said that it had made them fear for their family’s safety.

The psychological impact of online abuse can be devastating.

“Social media has helped enhance freedom of expression, including access to information in many ways. But as offline discrimination and violence against women have migrated into the digital world, many women are stepping back from public conversations, or self-censoring out of fear for their privacy or safety,” said Azmina Dhrodia.

Although these experiences do create a silencing effect, whereby women withdraw or modify their behaviour online as a result, another important finding of the survey is one of resilience: having had the experience of abuse or harassment on social media, 44% stated that they did not change the amount that they use social media at all.

All types of violence and abuse online require responses from governments, companies, or both, depending on their type and severity.

“Social media companies have a responsibility to respect human rights, including the right to freedom of expression. They need to ensure that women using their platforms are able to do so freely and without fear,” said Azmina Dhrodia.

Social media platforms explicitly state that they do not tolerate targeted abuse on the basis of a person’s gender or other forms of identity, and they now need to enforce their own community standards. They should also enable and empower users to utilise individual security and privacy measures such as blocking, muting and content filtering. This will allow women, and users in general, to curate a less toxic and harmful online experience.

Social media companies must also ensure that moderators are trained in identifying gender and other identity-related threats and abuse on their platforms.

Amnesty International is also calling on governments to ensure that adequate laws, policies, practices and training are in place to prevent and end online violence and abuse against women. However, it is critical that no undue restrictions or penalties are placed on the legitimate exercise of freedom of expression. Tackling online violence and abuse must not be used as an excuse to reduce the enjoyment of freedom of expression.

A quarter of survey respondents (25%) have a Twitter account, although fewer than half (12%) are active users – i.e. regular browsers – and only a third of those (4%) post regularly.

Regarding Facebook, 82% of respondents have an account, with more than half of those (43%) posting on the platform regularly, and about a third (32%) using their accounts to keep up with goings on, but do not post on them regularly.

The research was carried out by Ipsos MORI, using an online quota survey of 502 women aged 18-55, via the Ipsos Online Panel system.

Fieldwork quotas were set on the age, region and working status of the women surveyed according to known population proportions.

Data were weighted using a RIM weighting method, to the same targets to correct for potential biases in the sample.

The survey sample was designed to be nationally representative of women in Australia. The margin of error for the total sample is 4%. 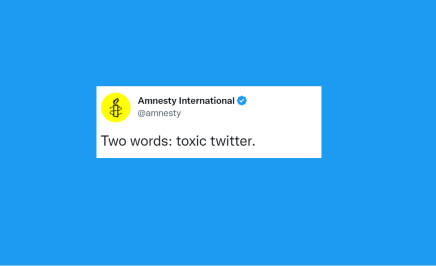 What does Elon Musk’s Twitter takeover mean for human rights?

If you’ve spent even a little bit of time on the internet lately, you’ve probably been unable...
Read More