“Before the war, Mum had the most amazing cookbooks. When we left, a neighbour actually broke into our house to take her recipe books and keep them safe. Everyone knew how amazing they were and that she had the best recipes”.

Holding a small, spiralled notebook first dated in 1992, Sanja turns the yellowed handwritten pages of her mother’s recipe book, initially in Bosnian, followed by German and finally English. Like entries in a culinary passport, each page, language and recipe simultaneously reveal the journey of Sanja’s family; escaping war, refugees living an uncertain future, and finally, permanent residents in Australia. 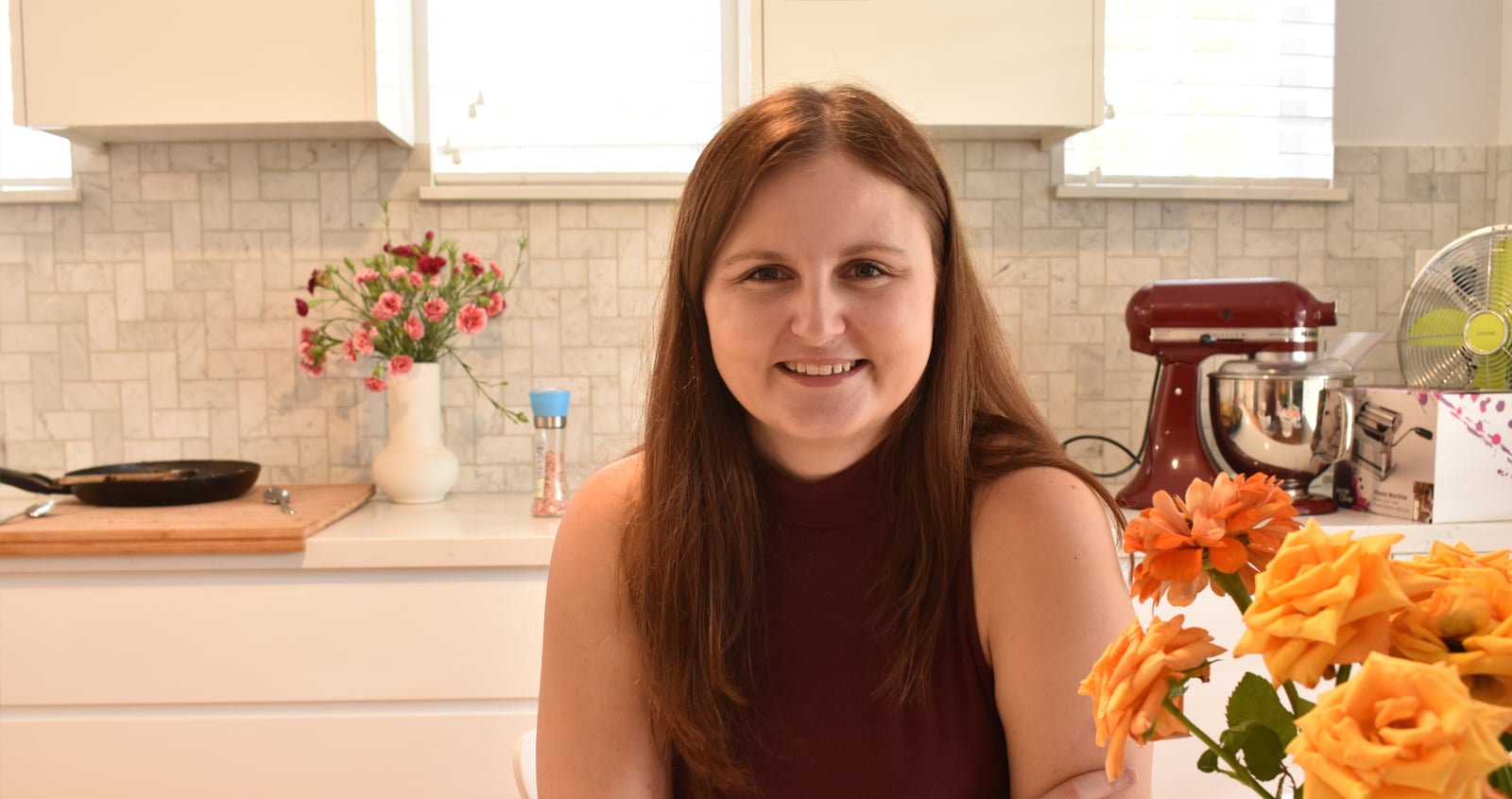 Sanja was born in 1985 in Sarajevo, located in the former Yugoslavia . “For me, a simple question like where are you from tends to be quite complicated. Or any form that asks where you are born, it is kind of hard because the country I was born in no longer exists”.

Born to a Muslim mother and a Serb Orthodox father, Sanja grew up embracing the traditions of both religions, without identifying herself as one or the other. During her early life, Bosnia was religiously and culturally mixed and interfaith marriages were neither uncommon nor contentious. In 1991, the year her sister was born, Sanja recalls the atmosphere changing; a civil war was forming, tensions were approaching her hometown, neighbours were turning against each other and religion was increasingly becoming a catalyst for division.

“We stopped staying at our house…”

“We stopped staying at our house and started staying at my aunt’s house. And then slowly we started sleeping in tracksuit pants, ready to go… We had to prepare the cellar, the basement, just in case there was anything we needed to hide. And then we started to sleep in the corridors of the house, as opposed to rooms with windows. It was a slow progression to the point that we were sleeping in the cellar.

One night there were massive bombings, there was gunfire, grenades. There was my mum, dad and my sister, my aunt and her two kids, my uncle and his mother, my uncle’s cousin and their son. There were mattresses everywhere and constant gunfire. My uncle would guard the door with a machine gun. He was the last resort. Luckily nothing happened. But the house was damaged from grenades and in all of this someone came in the house and robbed us”.

“Slowly we started sleeping in tracksuit pants, ready to go… We had to prepare the cellar, the basement, just in case there was anything we needed to hide”

Knowing their lives were at risk, particularly due their interfaith marriage, Sanja’s parents decided to leave Bosnia. “The war in our area was fought by the Bosnian Muslim army and the Bosnian Serb Orthodox army. We were in a situation where neither side would protect us. Because we didn’t fit in anywhere”.

Packing as many possessions possible into their little red car, Sanja, her mother, father and baby sister drove to a mountain area where her grandparents lived. Shortly after they left, a checkpoint was erected near her village. For the duration of the war, the checkpoint served to geographically and socially divide communities and families. Most of Sanja’s relatives were stuck on the other side.

After staying in the mountains for several weeks, Sanja’s family joined a convoy travelling to Serbia. Sanja’s mother tracked down a previous employer who booked the family into a hotel and purchased essential items for the family. Shortly after their arrival, word spread of refugee accommodation in a nearby army barracks. However, once they toured the accommodation, Sanja’s mother expressed caution, with its military infrastructure, the barracks could be easily transformed into a prison.

Word of mouth was integral

In the middle of the night, the family packed again into the little red car in the direction of the Czech Republic. An era without the internet or mobile phones and with limited access to landlines, intuition, word of mouth and chance meetings were integral to survival and smooth journeys. Fortunately, on their way, Sanja’s family crossed another Bosnian family who advised the Czech Republic was not accepting refugees and they should try Austria.

Due to their place on the convoy a few weeks earlier, Sanja’s family had the required paperwork to cross the border and enter Austria. It was there they found the charity Caritas who were running a program matching Austrian families with newly arrived refugees.

For 9 months, Sanja’s family resided with an Austrian host family. Sanja’s mother, cooked, cleaned and took care of the young children in both families and in return they paid her a salary. Although they were safe, Sanja’s parents did not have legal work rights. Strongly independent, they were adamant not to rely on government handouts or the generosity of their host family. Lacking autonomy, they were living day to day and could not envision a future.

Word spread that Germany was also accepting Bosnian refugees and offering them work rights. The decision was made and the Austrian host family drove to, and farewelled Sanja’s family at the Austrian-German border. Sanja’s family settled in a refugee home in Braunlage, North Germany. Formerly a youth hostel, situated in a National Park, the home was a welcoming environment.

Each family had their own room and all meals were provided. Progressively more Bosnian families joined. The children went to school, and all the residents enjoyed freedom of movement. A year later, Sanjas’s family moved into their own apartment in the nearby city of Braunschweig, found work and were living a self-supported, comfortable life.

However, their future was still uncertain. Germany had allowed Bosnian refugees into the country under the provision they would return once the war was officially declared over. Although the war was nearing the end, Sanja’s parents knew returning to Bosnia was not an option. The country had been segregated along religious lines. Bosnia was a different place to what they had known and they would not be safe. “Even though the war ended in 1995, and there was a ceasefire, there was still a lot of anger, division and sadness. Because of my parents’ mixed background there was nowhere for us to go. The country had been divided”.

On the 19th February, 1998, after a lengthy process that took three years and an initial unexplained Visa rejection, Sanja’s family arrived in Australia. With a suitcase, a backpack and duffel each, Sanja and her family arrived as permanent residents, after spending 7 years, half of Sanja’s life at the time, living an uncertain future with the impending threat they may have to return to a divided country. For the first time, in nearly 7 years, they felt secure, not only did they have a future, they could also make plans and establish roots.

However, parallel to her comfortable life in Australia, an enduring curiosity and fondness of Bosnia manifested in the space between. Leaving at a young age, questions of identity and belonging persisted for Sanja; materialising in many return trips to Bosnia to explore her relationship with her birth country.

“There is always this feeling that you are leading a life that you weren’t meant to lead. We had our life set out for us, we had everything planned. And then the war happened and we got thrown off our axis and we are just leading this life. And there is always that feeling that you don’t belong there because you were born there, you should have been there, this is your life etc. So I always had that, and carried that with me.

After a long trip to Bosnia, I realised that I don’t see myself living in Bosnia anymore. And that is what it took, for me to go over there. And I realised that I was a different person, and I was used to certain things that I learnt throughout my life, particularly in Australia”.