Following the formal closure of the Manus Island detention centre, Imran Mohammad, a 23-year-old Rohingya from Myanmar, describes its impact on the people detained there.

As well as the constant threat of being told to move to unsafe housing, the systematic removal of services is also adding to the mental trauma of the men here. The authorities removed the public phones almost two months ago and many men have no contact with their families. The main fences were taken down from Bravo and Charlie compounds and some buildings have been demolished. The canteen is closed to the majority of men and they have stopped providing fruit, sugar, coffee and paper cups. Men who never smoked before and who have become addicted to cigarettes can no longer get them – I cry seeing the men smoking dry leaves and papers.

The medical centre has been closed so currently we have no no medical or mental health support and patients requiring medication have been given a one-month supply, whether it is for a mental condition or physical. The Australian Government has not ruled out disruption to water and electricity which could lead to disease.

During our time on Manus Island we have experienced riot, being shot at, assaulted, robbed, and sometimes treated worse than animals. On many occasions we have been beaten in front of the Australian security guards as we moved around the centre. We call for help in the vain hope that someone might answer. The fear that has grown in our minds will never go away. It moves around in our minds constantly. Six men who were full of life have died because of this endless pain. They would still be alive if they had been taken to safety.

In Lorengau, about thirty kilometres from the detention centre, there are three facilities, two of which are newly built close to the houses of Manusians. Refugees are to be accommodated in the established East Lorengau Transit Centre, as well as West Lorengau Haus. Detainees with negative refugee status will be held in Hillside Haus to prepare for voluntary repatriation, deportation or refoulement. Neither of the new buildings have fences and there is no proper security.

Moving more than 600 men from many different countries into an isolated town will make conditions even more drastic for the refugees and local people alike. It is obvious that the Australian Government has no solution for the inevitable obstacles they have created during the four years of illegal imprisonment of innocent refugees and asylum seekers. There are hundreds of refugees and asylum seekers who have never left the centre as they are extremely frightened. Many are traumatised and mentally disturbed. Some of the local people, who don’t want us on their island, are just as afraid of the refugees.

There are hundreds of refugees and asylum seekers who have never left the centre as they are extremely frightened. Many are traumatised and mentally disturbed.

As there is only one hospital on Manus Island, which doesn’t even provide proper medical, psychiatric and general health services for the Manusians, let alone for refugees and asylum seekers. The lack of interpreters for those who cannot speak English, means some patients will never receive proper treatment, even for minor illnesses.

Some form of health service will be available at one of the accommodations but financial support offered will not cover our living costs. Those who require medication will have to provide for themselves and that is if the correct medication can be purchased in the town at all.

There will be no activities, gym or education facilities in the new accommodation and there is nowhere to go, except one supermarket, and nothing to do. It simply means that we will be stuck in prison indefinitely, a prison designed to inflict more psychological damage. The doors will be open but the fear of being attacked will keep us inside the four walls.

There is no clear information for how long we will be staying in Lorengau and our future is as uncertain as it has always been on Manus Island. It feels as though we could be stuck in limbo for years again and not knowing anything about our future will rob us of any strength we have left. With the closure of the detention centre, hundreds of Manusians who have been employed will lose their jobs. Many have said they will find it extremely difficult to go back to their previous way of life, as for the last few years they have had money to spend and, having worked with Western people, have lived a modern lifestyle.

Everything will change for the Manus locals when the centre closes. It is anticipated that unrest will escalate and we, the refugees and asylum seekers here, will suffer most because we are the outsiders. Many of the locals have never left Manus Province so they have zero awareness of other cultures. There will be an immense cultural communication breakdown which will significantly affect both side in multiple ways. This is an insufferable situation.

WE NEED A BETTER PLAN FOR REFUGEES. AGREE? PLEDGE YOUR SUPPORT TODAY >

Till now, we have done everything we have been told and shown great respect. However, we are still stuck in limbo without any hope of a building a life in a safe country. There is considerable uncertainty about our future on Manus Island. Friends who came with us on the same boat after 19 July have been living in safety in Australia for almost three years. Last month, after four years, 23 men from Manus Island found their freedom in America under the resettlement arrangement between the Australian and US governments. It brought some sort of hope to the lives of the 700 left behind. In the meantime, we are drowning in a sea of despair with every passing day.

We gather in peace and silence every afternoon around 2pm in front of the two main gates inside the centre, begging the Australian Government to bring our suffering on Manus Island to an end and to show we are resisting pressure to move to Lorengau. We are powerless and hopeless. We have no intention, nor the strength or ability to fight anyone. We have been made to endure indescribable and unspeakable hardships for more than four years.

We are still stuck in limbo without any hope of a building a life in a safe country.

Will we ever be able to leave?

For us who are held on Manus Island it never rains but it pours. We wonder, if we move to the transit centre will we be tricked again? Will we be forced to sign resettlement papers to remain in Papua New Guinea as some of the refugees have already experienced so they can have access to services and support?

We feel like the Australian Government will simply dust their hands of us and dump us here forever to become the headache of Papua New Guinea (PNG), where we are not wanted. We will not even be allowed to leave Manus to travel to the mainland.

As the PNG military reoccupies its land, we are being pushed beyond our limit to survive. If we stay in the centre we are at risk and if we leave we will be in danger. 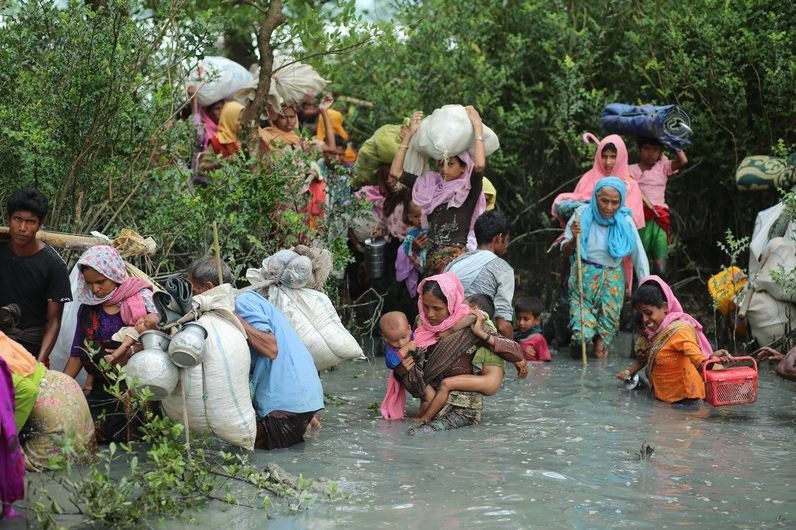 I am one of many stateless Rohingya refugees in detention on Manus Island and the fear we have endured for most of our lives is still with us. We came to Australia thinking that we would be given a chance to experience freedom and safety but in fact the reverse has been true. We are as frightened now as we were at home because we are surrounded by menacing PNG police and we don’t know what their next move will be.

Those of us from Myanmar who put our lives in danger on the sea to find freedom and safety cannot make plans before leaving our country. We are allowed no documentation by our government and so can never enter any country through normal channels. We have had no choice but to endure unspeakable tragedies and unimaginable horror all our lives, both at home and in many detention centres. I have spent almost seven years in detention. Despite having been through all of these hardships, our hearts still hold faith. I am begging the Australian Government on behalf all the refugees and asylum seekers to bring an end to our suffering. Please don’t let us die here slowly. We are as human as you. We’re real people, with real bodies and hearts that crave love and respect and want to share love and respect in return.

We are on our knees imploring the Australian Government to let us live our lives in a safe country. All we are asking for is our freedom and safety after for more than four years of imprisonment, waiting, feeling lost and drifting in this prison camp.

This blog was originally published by The Saturday Paper.

Manus Island: Australia abandons refugees to a life of danger As someone born to stateless parents, and who has been stateless all my life, I found it impossible...
Read More ‘I refuse to surrender my hope on Manus’