remind them what they can do for Indigenous kids

At the 9 December COAG (Council of Australian Governments) meeting, the Prime Minister and all state and territory leaders committed to taking swift action once the NT Royal Commission on youth detention and child protection gives their report in August. The PM also singled out the over-representation of Indigenous children as something of critical importance to come out of the Commission.

State leaders also agreed to “refresh” the Closing the Gap targets. As we’ve been campaigning for justice targets to be included in the Close the Gap framework we’re very interested in what this will entail. Agreeing to refresh these targets, while not a guarantee for inclusion of justice targets, is moving in the right direction.

While we didn’t see significant outcomes at the COAG meeting, Indigenous youth justice is now at the centre of talks – something almost unthinkable 12 months ago.

Your activism and lobbying efforts undoubtedly contributed to this huge development. In the past three months alone, Amnesty activists met with: 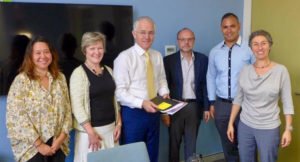 Amnesty activists and groups took part in Aboriginal and Torres Strait Islander events for 26 January across the country. From marching in record-breaking Invasion Day rallies, to celebrating the survival and resilience of Indigenous people and culture at festivals like Yabun, we’re engaging with allies across the country.

It was particularly great to see such strong momentum to #ChangeTheDate of Australia Day this year. The City of Fremantle led the charge, with activists having a great time at ‘One Day in Fremantle’, an alternative festival celebrating survival with world-class musicians, arts workshops and cultural activities. Some Amnesty staff also chose to work on 26 January in solidarity with Indigenous people.

Tell me about the next steps of the campaign… Amnesty activists at the Sydney Invasion Day rally in 2017. © Private

The Royal Commission into youth detention in the Northern Territory is a crucial opportunity to end the over-representation of Indigenous kids in the justice system. We are currently planning how to mobilise Australians from all walks of life to push for change when the Commission’s report is handed down on 1 August. We will be seeking your input for the plan over the next few months!

27 May 2017 marks the 50th anniversary of the landmark 1967 Constitutional referendum, where Australians voted to include Aboriginal and Torres Strait Islander people in the census and allow the Commonwealth to create laws for them.

In the meantime, keep doing what you’ve been doing so well – building relationships with politicians and potential allies, signing up people to the campaign and keeping the issue in the spotlight.

Want to get more involved in the campaign? Get in touch with the CIE activist advisory group at cie.group@amnesty.org.au or speak to your Community Organiser.