To mark NAIDOC Week and the theme #Because of Her We can we would like to pay tribute to Fanny Cochrane Smith, an extraordinary Aboriginal woman from Tasmania and great, great grandmother of Rodney Dillon, our Indigenous Rights Advisor.

Fanny Cochrane Smith (1834-1905) was a proud Aboriginal woman who practiced her culture throughout her life. Hunting and gathering food, making necklaces and weaving baskets from plants. Fanny’s mother passed her culture down to Fanny and Fanny passed it down to own her children, and it’s still being kept alive by her descendants. 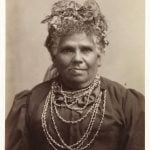 In Fanny’s early days as a vulnerable child she was taken away from her parents at the age of five. She was orphaned at the Queen’s Orphanage in Hobart. Then Fanny was moved to the convict station at Oyster Cove (Putalina).

Fanny spent her childhood in domestic service. Those years were harsh ones; and to survive, she had to develop an indomitable spirit. Once Fanny gained her freedom, it became apparent that she also had an entrepreneurial flair.

Fanny married her English sawyer husband, William, at the age of 20, and they had 11 children – 6 boys and 5 girls. Fanny established a boarding house in Hobart and, with husband William, built a business cutting and selling timber. Fanny would work for days at a time in the bush splitting shingles, carrying them out herself and walking up to 50kms for supplies.

Fanny was a successful business woman in colonial society. However, she always kept her Aboriginal culture close to her heart, passed on to her by her mother. A rich treasury of cultural knowledge and practices were passed on including bush foods and medicines, shell necklace and basket making. Fanny also kept close ties with her people, including Truganini, who taught her bush craft from her country on Bruny Island and with whom Fanny would fish, hunt and collect bush tucker medicine and Aboriginal ceremony.

After a few years Fanny and her family moved to Irishtown (now Nichols Rivulet).

Fanny and William were early converts to Methodist Church in their area and one of their sons became a lay preacher. Fanny donated land for a church to be built on. Until the church was built however, services were held in Fanny’s kitchen.

Fanny was well known for her cooking skills, she was an active fund-raiser and hosted the annual Methodist picnic. People travelled long distances to sample her cooking and to see her perform Aboriginal songs and dances.

After Truganini’s death in 1876 Fanny renewed her claim to be the last surviving Tasmanian Aboriginal. In recognition of the claim, parliament increased her annuity to £50, and in 1889 gave her a free grant of 300 acres (121 ha). She established a home and farm.

However, it was as a performer that she established herself as a Hobart celebrity. Fanny Cochrane-Smith trod the boards twice at the Theatre Royal, returning for another performance in 1903. By this time, her fame had spread. Horace Watson, a Hobart industrialist who made his fortune with his famous Keen’s Curry, attended one of her performances and was so impressed that he arranged for her songs to be recorded on the newly–developed Edison wax phonograph.

Fanny Cochrane Smith’s songs are amongst the earliest musical recordings ever created and the only recordings ever made of Tasmanian Aboriginal song and speech. Fanny was Australia’s first Aboriginal recording artist, and an influential matriarch for her family members who maintain those traditions to this day.

After Fanny’s death in 1905 the church, built on Melukerdee Country, gradually fell into disuse and was sold off. Even though her descendants kept watch on it, it became the target for thieves and minor vandalism until 1998, when Rodney Dillon, then the Tasmanian Commissioner for the Aboriginal and Torres Strait Islander Commission (ATSIC), sought funds to purchase the church and the surrounding land.

The South East Tasmanian Aboriginal Corporation (SETAC) restored the building and it is now the Living History Museum of Aboriginal Cultural Heritage.

Today this museum is dedicated to Fanny’s memory and run by the local Aboriginal community. If you find yourself in Cygnet, Tasmania drop by and learn more about Tasmania’s Aboriginal cultural heritage.

This story was shared with us by Rodney Dillon, our Indigenous Rights Advisor. It is about one of the many strong women in his family and in his life. It’s adapted from a speech Rodney’s daughter, Bronwen McAnally, gave during NAIDOC Week 2018 in the church that Rodney’s Great, Great Grandmother built in Nicholls Rivulet, Tasmania. Thank you to Rodney and Bronwen for sharing their story of their strong proud matriarch. Hobart and Joondalup gather to #BringThemHere

The Hobart and Joondalup local groups have held some stellar events over the past few months to...
Read More