Dolma Tso, a 30-year-old Tibetan woman who was imprisoned in 2013 for helping a neighbour, walked free from detention unharmed in December 2016. 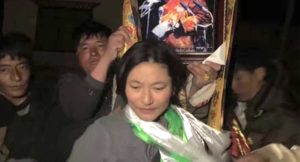 In 2013, Dolma Tso moved the body of her neighbour, Kunchok Tseten after he had set himself on fire. The Chinese authorities have a policy of immediately seizing the body of people who have committed self-immolation and not returning it to their relatives. For this act, Dolma was arrested and sentenced to three years in Chengdu Women’s Prison in south-west China.

During her 11 months’ pre-trial detention, other detainees witnessed police abusing Dolma, including tearing her earlobe, piercing a sharp pencil into her wrist, and shaving off her hair.

In 2015, Dolma was at risk of undergoing a forced medical procedure that would put her health at risk, and her family’s request to see her condition for themselves were denied.

Amnesty International called on the authorities to immediately:

Thanks to the Amnesty supporters who took action for Dolma, the operation didn’t go ahead and Dolma left prison unharmed.

“Thank you for taking action on behalf of my sister Dolma Tso. Because of the actions taken by supporters, the Chinese government could not proceed with a medical surgery that they intended against my sister’s wishes.”

Read about more of our recent wins The trial of a Tibetan language education activist, who could face up to 15 years in jail for...
Read More