The International Criminal Court (ICC) must investigate unlawful attacks committed during Israel’s August 2022 assault on the Gaza Strip as war crimes, Amnesty International said today in a new research briefing. Using ​photographs of weapons fragments, satellite imagery analysis and testimony from dozens of interviews, the organization reconstructed the circumstances around three specific attacks, two of which were carried out by Israeli forces and one most likely by Palestinian armed groups. The briefing, ‘They were just kids’: Evidence of war crimes during Israel’s August 2022 Gaza offensive, sets out why these attacks may amount to war crimes.

“Israel’s latest offensive on Gaza lasted only three days, but that was ample time to unleash fresh trauma and destruction on the besieged population.”

“The three deadly attacks we examined must be investigated as war crimes; all victims of unlawful attacks and their families deserve justice and reparations,” said Agnès Callamard, “the violations we documented were perpetrated in the context of Israel’s ongoing illegal blockade on Gaza, a key tool of its apartheid regime. Palestinians in Gaza are dominated, oppressed and segregated, trapped in a 15-year nightmare where recurrent unlawful attacks punctuate a worsening humanitarian crisis. As well as investigating war crimes committed in Gaza, the ICC should consider the crime against humanity of apartheid within its current investigation in the Occupied Palestinian Territories.”

Amnesty International interviewed 42 individuals for the briefing, including survivors of attacks, relatives of those killed or wounded, eyewitnesses, and medics. Israeli authorities have denied Amnesty International access to the Gaza Strip since 2012, so the organization worked with a fieldworker who visited 17 attack sites and collected evidence such as photographs of weapons remnants. Amnesty International’s weapons expert and Evidence Lab analysed evidence collected on the ground, as well as satellite imagery and other open-source material relating to the attacks.

Amnesty International considered it had sufficient evidence to assess the lawfulness of three of the 17 attacks it documented, and these are the focus of the briefing.

Amnesty International wrote to Israeli authorities and to Palestinian Islamic Jihad on 30 September 2022, providing a summary of its key findings and requesting comment. It had not received a response from either at the time of publication.

On 5 August 2022, Israel launched what it described as a “pre-emptive” military offensive on the Gaza Strip, targeting Palestinian Islamic Jihad and its armed wing the Al-Quds Brigades. Israeli authorities said the offensive was in response to threats of attack.

According to the UN, 49 Palestinians were killed as a result of the fighting. Amnesty International’s assessment is that 33 Palestinians, including 17 civilians, were killed by Israeli forces.

Of the remaining 16 Palestinians who were killed, Amnesty International concluded that 14 were civilians. The organization gathered sufficient evidence to conclude that seven of these were killed by a rocket launched by Palestinian armed groups; it was unable to conclude which party was responsible for the seven remaining civilian deaths. These seven civilians were killed in four attacks, after which remnants of weapons were immediately removed, preventing Amnesty International’s researchers from accessing material evidence. As noted below, this removal matches a pattern identified in past cases where Palestinian rockets misfired.

Duniana al-Amour, a 22-year-old fine arts student who lived with her family in a village near Khan Younis in the southern Gaza Strip, was killed in what Amnesty International believes was the first Israeli attack of the weekend. At around 3.55 pm on 5 August, a projectile fired by an Israeli tank hit the al-Amour house, killing Duniana and wounding her mother, Farha, and her 25-year-old sister Areej. Duniana’s father Adnan al-Amour, who was watering olive trees in his field when he heard the strike, said his wife and children had been drinking tea inside the house at the time, as was their custom each Friday.

The al-Amour family home is located just 1km away from Gaza’s border fence with Israel. It is also about 750 metres away from a watchtower installed by the Al-Quds Brigades, and 360 metres from a watchtower belonging to the Izz al-Din al-Qassam Brigades, the armed wing of Hamas. Some 20 minutes after the shelling of the al-Amour house, the Al-Quds Brigades’ tower was shelled by Israeli forces.

Photographs of munitions remnants allowed Amnesty International’s weapons expert to identify the projectile that killed Duniana as a 120mm M339 tank round, which is currently manufactured by the Israeli company IMI Systems, owned by Elbit Systems. The projectile, which no Palestinian armed groups are in possession of, is marketed as delivering a “high hit probability and lethality with low collateral damage”. Photographs of damage to the al-Amour family home show that the projectile punched a hole in only one wall.

An analysis of the projectile’s precision allowed Amnesty International to identify its intended target. Most 120mm cannon have a circular error probable of just 4 metres – this means half of all rounds they fire would be expected to hit within a 4-metre diameter circle, if properly aimed. It is therefore unlikely that the tank was aiming at either of the watchtowers when it struck the house – it would have had to have missed by hundreds of metres.

Amnesty International concluded that Israeli forces appear to have deliberately targeted the al-Amour family’s house. The organization found no evidence that any members of the al-Amour family could reasonably be believed to be involved in armed combat.

“We’re on the border and [Israeli soldiers] know everything about us and know that we have nothing to do with politics, that we’re just simple farmers. Their drones monitor our every move.”

The Israeli military have not commented on the shelling of the al-Amour family’s house, and have given no indication that they plan to investigate the killing of Duniana al-Amour.

The children all lived in the severely overcrowded Jabalia refugee camp. Haidar Nejem, Hamed Nejem’s father, said the children often played in the cemetery where there was more space.

“Suddenly, we heard the sound of a missile exploding very close to us. I rushed to the cemetery like almost everyone else in the neighbourhood. People started to collect body parts, carrying shreds.

Parents could not recognize the bodies of their own children. They did not know if the bits they were holding belonged to their sons.”

The Israeli military initially blamed Palestinian Islamic Jihad for the attack. But on 16 August, unnamed sources from the military told Haaretz newspaper that a preliminary investigation into the attack had found that neither Palestinian Islamic Jihad nor the Al-Quds Brigades were firing rockets at the time of the attack. Israel, however, had reportedly been attacking “targets” near the area. Since the publication of the article, the Israeli army has neither confirmed nor denied these reports.

Amnesty International’s weapons expert determined that finely machined metal pieces photographed by the fieldworker at the site were consistent with fragments from an Israeli guided missile. Local residents reported hearing the sound of a drone flying overhead shortly before the attack.

Amnesty International was unable to find any evidence of military activity by armed groups near the cemetery at the time of the attack. Satellite imagery from 10 days prior showed no apparent military target in the vicinity, and residents said the situation had not changed on 7 August. The absence of apparent military targets indicates that the strike may have been a deliberate direct attack on civilians or civilian objects, and could therefore constitute a war crime.

Even if Israeli forces had been targeting Palestinian fighters or military equipment when they hit the cemetery, the horrifying outcome requires an urgent investigation into whether all feasible precautions were taken to protect civilians.

Muhammad al-Neirab, whose children Ahmad and Momen were killed in the attack, said:

“It was a hot summer evening and we had the usual power cut, so the children could not stay at home, which is very small and suffocating especially when there is no electricity […] At 9.02pm, the street was hit. It was filled with wounded people, with blood, with shrapnel. My little son Momen died in my arms and Ahmad died just 1m away from me. We just take solace in the fact that the bodies of our children were not torn to pieces.”

Muhammad al-Neirab was one of many people who alluded in interviews to hardships caused by Israel’s illegal blockade, such as power cuts and lack of space. The fighting in August forced Gaza’s sole power station to shut down for two days, exacerbating the humanitarian crisis caused by the blockade. More than 1,700 housing units were damaged during the fighting, leading to the internal displacement of some 450 Palestinians.

Amnesty International believes there is enough evidence to indicate that the attack on Jabalia refugee camp was the result of a misfiring rocket which was launched by Palestinian armed groups, apparently targeted towards Israeli territory. Researchers identified several commonalities between the attack in Jabalia camp and previous strikes which have been attributed to Palestinian armed groups. For example, weapons remnants had been removed – this is notable because Palestinian authorities and armed groups in Gaza generally preserve and display remnants of Israeli weapons and munitions.

Locals interviewed by Amnesty International said they had not seen or heard an Israeli warplane or drone before the strike; other residents, who requested to remain anonymous, said they believed a “local rocket” was responsible for the attack. Two minutes before the strike, the Al-Quds Brigades began sharing on social media a live video of what it described as a volley of rockets being fired towards Israel.

Like other cases in which similar Palestinian rockets are alleged to have caused civilian deaths and injuries, the attack on Jabalia camp should be investigated as a possible war crime. Since 2008, Palestinian armed groups have fired thousands of indiscriminate rockets towards Israeli towns and cities, in violation of international law, and dozens of Israeli civilians have been killed as a result. The unguided rockets used by Palestinian armed groups in Gaza, including the Al-Quds Brigades, are inherently inaccurate. Their use in civilian areas violates international humanitarian law and may amount to a war crime.

Amnesty International wrote to Gaza’s Prosecutor General raising concerns about the removal of weapons remnants from attack sites. It also requested information about any investigation into the attack on Jabalia camp, and into the four attacks where it could not establish responsibility for civilian deaths. The Prosecutor General responded that Gaza authorities were investigating all cases of violations that occurred during the conflict, but did not mention the attack on Jabalia camp specifically, and did not provide any details on the investigation’s progress.

To establish responsibility for the civilian deaths and injuries​ in the Jabalia camp attack, Palestinian authorities must cooperate with independent investigators, including those from the ICC. Eyewitnesses and survivors of the attack must be allowed to speak out without fear of reprisals.

As Wissam Nejem, who lost four cousins in the Israeli attack on the cemetery, put it:

“Nothing can bring back our dead children, but truth and justice could at least give the families some peace.”

Amnesty International has repeatedly documented unlawful killings and potential war crimes in Gaza. The organization sets out in Chapter 6 of its February 2022 report, Israel’s apartheid against Palestinians: Cruel system of domination and crime against humanity, how such acts constitute the crime against humanity of apartheid. 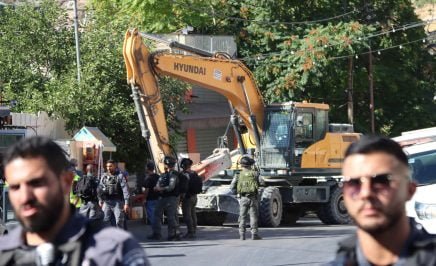 Amnesty Australia takes a look at the origins of the Israel-Palestine conflict, the current...
Read More
Want to make headlines?