The My New Neighbour campaign is a neighbourhood-led solution to help refugees – people who are seeking to rebuild their lives somewhere safe. It’s all about people power and giving communities the opportunity to lead the change from within.

We hit the streets just three months ago and already activists across the country have been building public support that cannot be ignored by our political leaders. Even though it’s still early in the campaign the wins are coming in thick and fast.

Here’s what we’ve achieved so far. 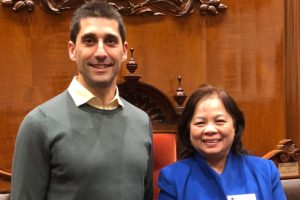 Early in the campaign almost 12,000 Australians signed our petition calling on the Australian Government to expand and improve community sponsorship for refugees so that more families can rebuild their lives in safety.

As a result, in March this year the ACT Government passed a motion calling on the Federal Government to expand the refugee community sponsorship program.

We couldn’t have done that without your support.

And thank you to our amazing activists across the country for their persistence, hard work and passion for refugee rights. These wins will continue to grow. But the work does not stop with the councils already supporting us – it’s important that we continue to bring our communities with us on the journey.

As the campaign heats up, we’ll be casting our net beyond councils to other leaders in our community: our teachers, local businesses and sporting heroes. We look forward to hearing more voices raised loudly and proudly to welcome refugees.

The Western Bulldogs have added their support and voice to the campaign by calling for more community-led programs like community sponsorship. This is in addition to their great work in helping to resettle refugees in the western suburbs of Melbourne. Check out this video about their resettlement work and community sponsorship. Who will be next to join the call?

Want to get involved? Add your name to our petition today and call for fairer refugee sponsorship across Australia.