Long-running regional group Wagga Wagga based in the town of Riverina played centre stage to the launch of #mynewneighbour last week. The group who are committed to the protection of refugees are leading the charge in their community for alternative pathways and a fair go for refugees. The group’s passionate convener Gabrielle Robinson worked tirelessly with Canberra-based activist Peter Morris to pull out all the stops to make sure that the launch and this speaker event was a phenomenal success. 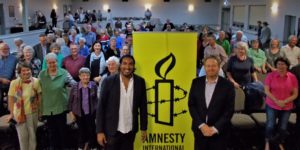 The night was led by leading refugee lawyer David Manne and attended by Amnesty’s Refugee Campaigner Shankar Kasynathan and an audience of 170 people. All keen to learn how they can build momentum behind the #mynewneighbour campaign and make sure community sponsorship is on the minds of community leaders.

The group made the most of David’s visit making sure that they took every opportunity to get him in front of a camera and or a microphone. Resulting in interviews with Verity Gorman on ABC Radio Riverina and WIN TV journalist, Stephanie Muir. David also spoke to local high school students and at the university during his visit.

The Wagga Wagga group have demonstrated the impact that can be created through building power on the ground. If you want to hear from the group about how they made all this happen and what it’s like to play such a pivotal part in launching this new campaign, make sure you join us for the next refugee hook up on the 18th April.

If you want to get involved in the campaign and start building support in your community for alternative pathways for refugees check out all of the latest resources here.

It’s time to start focus on the solutions.

Get involved in the Community Sponsorship Campaign