Saudi Arabia will have put to death more than 100 people in the first six months of this year if it continues to carry out executions at its current pace. At least 94 people have been executed so far this year, higher than at the same point last year.

At least 158 people were put to death in Saudi Arabia in 2015, the highest recorded figure in the country since 1995.

“The steep increase in executions is even more appalling given the pervasive flaws in Saudi Arabia’s justice system which mean that it is entirely routine for people to be sentenced to death after grossly unfair trials. The Saudi Arabian authorities should end their reliance on this cruel and inhuman form of punishment and establish an official moratorium on executions immediately.”

The case of 21-year-old Ali al-Nimr who was sentenced to death based on “confessions” he says were extracted through torture, provides a glaring example of the arbitrary use of the death penalty after proceedings that blatantly flout international human rights standards. 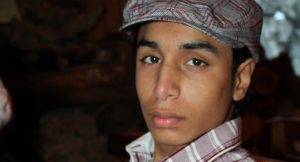 Today marks two years since Ali al-Nimr, who was arrested after taking part in anti-government protests, was sentenced to death by a special security and counter-terrorism court for a series of offences such as attacking security forces and committing armed robbery. He was just 17 when he was arrested. International human rights law prohibits the use of the death penalty for crimes committed by persons under the age of 18.

“Ali al-Nimr has already spent two years on death row – instead of forcing him to spend a single day longer awaiting execution the Saudi Arabian authorities should quash his conviction and order a re-trial immediately in proceedings that meet international fair trial standards without recourse to the death penalty,” said James Lynch.

Two other young men, Abdullah al-Zaher and Dawood al-Marhoon were sentenced to death a few months after Ali al-Nimr, on a list of similar offences, and also say they were tortured into “confessing”. “My heart is exhausted”: A mother’s story of death row in Saudi Arabia