In Australia, the definition of marriage has changed 20 times. On average, that’s an amendment to the Commonwealth Marriage Act nearly every three years.

Without exception, changes to marriage that we now take for granted were controversial at the time. Change is usually incremental and lagging behind the currently accepted societal norms. But we change our laws for a reason: to strengthen equality and human rights.

Yet here we are, in the middle of the Marriage Equality Postal Survey, still being told that marriage can’t be expanded to give the LGBTQI community equality before the law because of the history and traditions of ‘the institution’.

So here’s a reminder of seven times that marriage in Australia changed and the world didn’t end.

In March 2013, forced marriage was included in Australia’s criminal code. Hang on. That’s only four years ago.

SBS reports that, for decades, Australian girls (and a small number of boys) have been married off to much older partners against their will, in large and lavish ceremonies, that are rarely reported.

The change in the law gave the Australian Federal Police greater powers to investigate suspected cases and prosecute anyone who assists in the arrangement of a forced marriage or had prior knowledge (parents, the celebrant, family friends, etc). Encouragingly, reporting of forced marriages to authorities is now on the rise.

Interracial marriage in Australia has been limited by entrenched racism and the White Australia Policy.

In the 1850s, during the gold rush, there were around 2000 legal marriages between white women and migrant Chinese men in Australia’s eastern colonies. By late 1878 this number fell to 181 marriages as a result of widespread rallies by white men who viewed such marriages as a threat to the white race.

More recently, the White Australia Policy also limited interracial marriages. After the Second World War, the Australian Government refused to sanction marriages between Australian servicemen and Japanese women they had met while stationed overseas. The couples were also prevented from returning to Australia together. Many men, who had risked everything for Australia, migrated to Canada to start new lives with their families.

According to the Australian Bureau of Statistics, around 42 per cent of marriages in Australia today involve at least one partner who is not Australian-born. Indigenous Australians, up until the 1960s, could only marry with government permission.

In the late 1950s the case of Gladys Namagu and Mick Daly, known as the ‘Outback Romeo and Juliet’, made headlines. The NT couple were denied marriage, sparking an outpouring of public sympathy. When the matter was raised in federal parliament, MPs demanded an assurance from the government that discrimination would never be written into the landmark national marriage legislation they were poised to pass.

In 1975, the Family Law Act ensured that for the first time, either party of a marriage didn’t need to front a court and set out a particular wrongdoing of the other to get a divorce.

Proving fault in an extremely adversarial environment was important because it often influenced property settlement. This had a major impact on children whose parents had to prove or defend themselves against fault.

The principle of no-fault divorce, which applies today, means that 12 months of separation is sufficient evidence of a marriage breakdown.

Until 1987, rape within marriage was not prosecuted in Australia. States and territories had ‘marital exemptions’ in their definitions of rape which basically stripped the ability of married women to say no to sexual intercourse.

In 1991, in R v L, the High Court of Australia ruled that if the common law exemption had ever been part of the Australian law, it no longer was.

Amnesty International works to end forced marriage in Burkina Faso where most girls are married before they turn 19. © Sophie Garcia / AI

Tasmania was the first state to stop child marriages. But this didn’t happen until 1942!

The minimum age of marriage was raised from 12 for women and 14 for men to 16 and 18 respectively.

In 1966, the bar on employment of married women in the Commonwealth Public Service was abolished. The bar was designed at the beginning of the 1900s to keep women from “stealing” men’s jobs and also to boost birth rates.

Marriage in Australia has continuously changed over the years to strengthen human rights. And every time marriage laws have changed there was a vocal minority saying that it was wrong to do so.

In each of these cases, we can now look back and say that these opponents were on the wrong side of history. The postal survey is just another chapter in Australia’s marriage history that will hopefully end in equality before the law for more Australians.

This article was based on Paul Ritchie’s 2016 book Faith, Love & Australia: The Conservative Case for Same-Sex Marriage.

Update: After months of hard campaigning by politicians, community groups, organisations, activists and the LGBTQIA+ community, marriage equality was achieved in Australia on 9 December 2017. 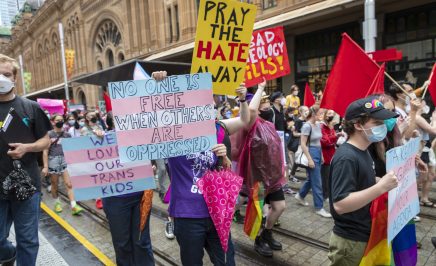