January 9, 2017 marks two years since the Saudi Arabian authorities publicly flogged the blogger and activist Raif Badawi. He was sentenced to 1,000 lashes and 10 years in prison for “insulting Islam” online.

Mr Badawi founded the (now-closed) online forum Free Saudi Liberals, which facilitated debate about politics and religion. His charges relate to articles he wrote criticising religious authorities in Saudi Arabia, as well as pieces by others that were published on his website.

After his first brutal session of 50 lashes, which took place in front of a mosque in Jeddah, a doctor advised prison authorities that he was unfit to undergo a second round of the inhumane punishment.

“He is losing any hope of being released. We need to work together to build his strength and give him hope again”Ensaf Haider

Since that time, activists worldwide – including over 37,000 Australians – have demanded his release and condemned the torture, resulting in it’s repeated postponement. 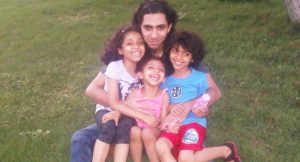 Raif Badawi with his kids © Private

However, as long as Mr Badawi’s sentence stands he is at risk of further flogging. Former detainees have told us that the security forces’ use of torture remains common and widespread. Those responsible are never brought to justice.

On this anniversary, Ensaf Haider, Raif Badawi’s wife, and President co-founder of the Raif Badawi Foundation for Freedom (RBFF), told Amnesty International, “Unfortunately Raif is not feeling well, his morale is low and his health is suffering; he is losing any hope of being released. We need to work together to build his strength and give him hope again.”

Saudi Arabia is very sensitive about its public image and international standing. If we target officials publicly, they could be forced to respond and publicly shamed into stopping the flogging. Here are a few Twitter accounts to try:

Call up the Embassy of Saudi Arabia to demand that Raif is not flogged again and that they release him immediately. We know this can be a particularly effective (and annoying) form of campaigning.

Raif Badawi should never have been imprisoned. He is a prisoner of conscience solely imprisoned for peacefully exercising his right to freedom of expression. The authorities need to quash his sentence and conviction and release him immediately and unconditionally.