In this edition of brief insights, Charles Rozario chats to Rob Lundie, long standing Amnesty activist, volunteer, donor, bequestor and recipient of the National June Fassina Award. Rob has been a supporter for the past 31 years. How did all begin and what keeps him going?

It was a film called Missing that sparked Rob’s interest in human rights. Released in 1982, the film was about the disappearance of an American journalist in South America in the aftermath of the Chilean coup of 1973.

“I still have this particular memory of someone who knocked on my door at home to canvass support for Amnesty. I had recently watched the film and I thought – it was the right ask at the right time.”

Like many supporters, Rob has spent years writing letters for various campaigns to help free prisoners of conscience. When Rob moved to Australia’s capital in 1989, he decided to join a local Amnesty group. He laughs as he recalls a fellow activist who encouraged Rob to take on a coordinator role.

“’Just a few things to do’, she said. Well, it was a lot more than a few things but I didn’t mind at all. I thought she made a clever pitch and I’m still very good friends with her today.”

Rob has since taken on many roles including serving on the Branch Committee and the Board. But one thing that Rob has always been keenly aware of is the impact that fundraising has on Amnesty’s ability to carry out its work. To that effect, Rob has led his local group to raise funds through various activities from Candle Day to the well-known Amnesty Quiz Night that been running in Canberra since 1991 much to Rob’s credit. 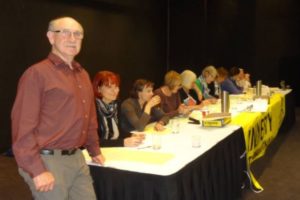 Rob Lundie at an Amnesty event.

In 2016, Rob was awarded the June Fassina Award for the key role he played helping to raise over $200,000 for Amnesty over the past 25 years. The June Fassina award recognises outstanding and meritorious achievements in service longer than 10 years to Amnesty International Australia.

When asked about the human rights issues that he feels passionate about, Rob is hesitant to be selective. “They are all important”, he says, however Rod especially remembers writing for appeals that challenged governments about torture and those denied a fair trial. He is also very keen to see the death penalty abolished. When Amnesty started as a movement 55 years ago, there were only 16 countries that did not practice the death penalty. Today that number has risen to 104.

Rob has also chosen to leave a gift in his Will to Amnesty. I asked what motivated him to do this.

“It occurred to me one day as I was collecting for Candle Day. I remember thinking, Amnesty is here to stay! It has a strong vision for the future. The fact that it is not funded by governments allows it to be independent. You hear too often about effective and worthy projects in a whole range of areas that are forced to curtail their activities or close down altogether because of cuts to Government funding. Amnesty’s approach is totally impartial and its research is highly credible. So, it made sense to me to ensure that Amnesty continues long into future because human rights issues are so widespread and equally so prevalent.”

Rob went on to say something very interesting about the extent of human rights abuses.

“A lack of human rights can affect us all in various ways. It’s not a wealth versus poverty matter. That’s why I think it’s so important that Amnesty is always around.”

Rob acknowledges that not everyone is going to be in agreement with all of Amnesty’s campaigns, in particular some of the issues that divide opinion such as the death penalty or refugees.

“What’s important is that you don’t have to necessarily agree with everything. There are a great many campaigns and while there are some that might challenge us, there are many others that we can readily support. We all know the importance of equal human rights. We can empathise and understand how it affects people – and how it could so easily be us on the receiving end of human rights abuse.”

If you would like more information about leaving a gift in your Will to Amnesty, please call Charles Rozario on (03) 9412 0730 or email charles.rozario@amnesty.org.au. November 2018 Want to find out what is happening next year? Join our NSW regional update on 17...
Read More 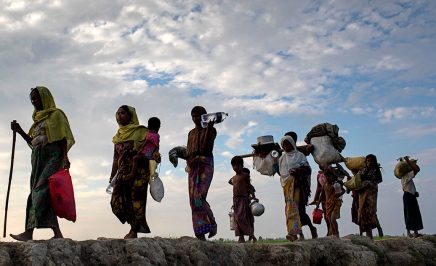